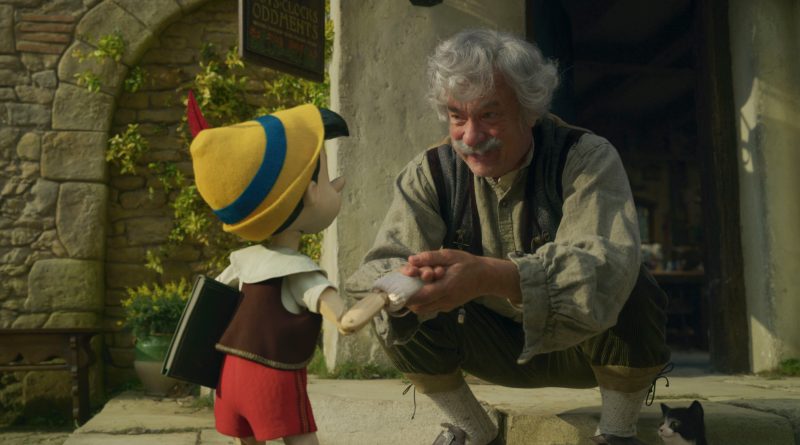 This timeless tale opens with Jiminy Cricket (Gordon-Levitt) singing “When You Wish Upon a Star,” which was first introduced in the 1940 cartoon. After fashioning a boy marionette made of pine, the lonely, widowed woodcarver Geppetto (Tom Hanks) makes a heartfelt wish for a ‘real’ son.

Cue the Blue Fairy (Cynthia Ervo), who animates the marionette. But Pinocchio (voiced by Benjamin Evan Ainsworth) still isn’t a ‘real’ boy. To do that, he must prove himself to be brave, truthful and unselfish.

When the world is full of temptations, being ‘good’ requires a conscience – which Pinocchio lacks. So Jiminy Cricket must guide his integrity. That isn’t easy since fun-loving Pinocchio tends to be disobedient. And whenever he tells a lie, his nose grows longer and longer. (Did you know that there’s even a long-nosed emoji for lying?)

Loosely based on Pinocchio’s Adventures: Story of Puppet, it was originally published in 1883 as a collection of dark stories by Italian author Carlo Lorenzini under the pen name of Carlo Collodi. For this version, it’s been reimagined by Chris Weitz and director Zemeckis who created the entirely new character of Sophia the Seagull (voiced by Lorraine Bracco).

“Seldom has a work of literature been so overshadowed by its celluloid adaptations,” wrote John Hooper and Anna Kraczna in their introduction to their recent Penguin Classics translation. According to them, the story’s message is: “Get educated, get informed, and don’t let other people pull your strings.”

On the Granger Gauge of 1 to 10, Pinocchio is an enchanted 6, streaming on Disney+ as a Premium Exclusive.