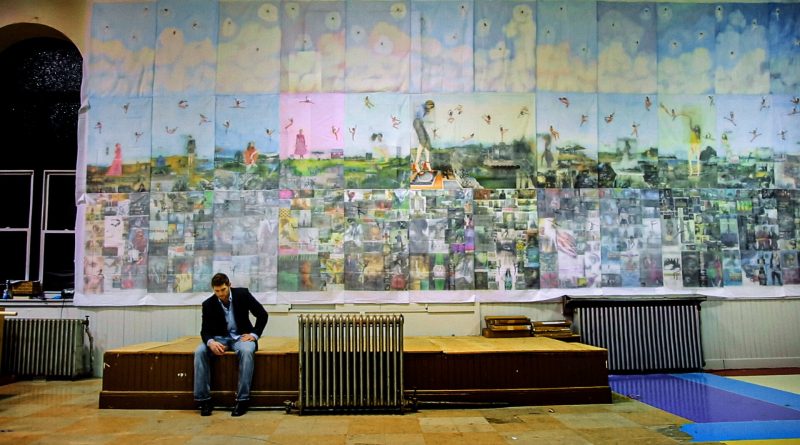 During my daily newspapering days, I once attempted to explain an artist’s creative process to a linear-minded features editor, connecting the inventive dots between concept and execution.

After numerous “I don’t get it” responses, I finally gave up, offering this final reason: “That’s just the way the artist’s mind works.”

Maybe my editor would understand if she saw Art & Krimes by Krimes.

Focusing on the life, times — and crimes — of artist Jesse Krimes, this award-winning documentary offers a compelling portrait of the artist as a young man, delving into how and why art helps artists discover not only their artistry but themselves.

In the opening minutes of Art & Krimes, we follow Krimes into his grandfather’s machine shop in Lancaster, Pa. (As a boy, he and his teenage mother lived above the shop.)

The “good grease smell” reminds him, “yeah. I’m home,” prompting memories of how he fashioned artworks from dirty, discarded parts.

That leads to Krimes’ recollections of his “train wreck” youth, which culminate in losing a college art scholarship — and being convicted of selling cocaine, ultimately landing him in federal prison.

For Krimes, incarceration leads to a true artistic breakthrough, as he devises ways to create — and comment on his captivity— using the supplies available to him behind bars.

He figures out how to transfer images, using hair gel and sanitizer, onto small soap bars and prisoner-sewn bedsheets.

“I began to think about building a sort of time machine, one made of images sewn together, blended, embedded,” he explains. “A chance to travel outside of my container, visiting the future that already exists while avoiding the present circumstances of my condition.”

One of the documentary’s most beguiling scenes finds the three discussing favorite artists. Owens is a Matisse fan: “Better than Picasso,” he argues. “Matisse is terrible,” Krimes replies. “Ladies and gentlemen, excuse that sacrilege,” Owens zings back, delighting in the camaraderie. After all, as he marvels, “what are the odds of me bumping into someone who is a conceptual artist in a federal prison?”

Throughout Art & Krimes, co-writer and director Alysa Nahmias explores sobering issues related to America’s prison system — the racism, the damage done to families, the struggles of those who, after their release, must find their way back into a world largely indifferent to acknowledging their humanity, let alone their talents.

After experiencing Krimes’ journey, chances are you’ll understand how this artist’s mind works — and appreciate the opportunity to do so.