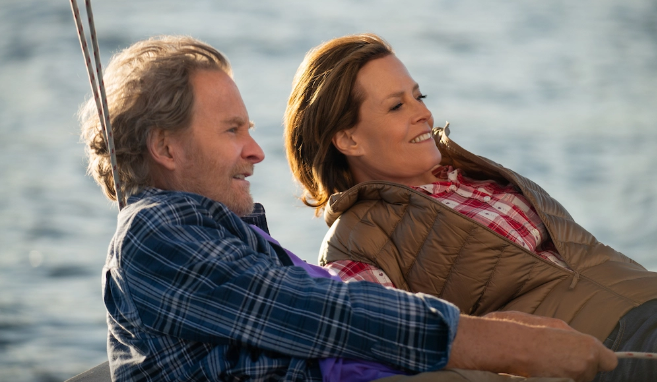 Sometimes, the illusion of having it all together is an art in survivor subterfuge, especially when you are a kingfisher in a small Massachusetts coastal town where the prime properties are the big catch.

The Good House film is a bittersweet yarn, a dramedy starring Sigourney Weaver as Hildy Good, a well-educated local, a New England real estate agent operating in her small town of “Wendover.” Kevin Kline stars as Frankie, a weathered townie now well-heeled but low-key, who was her first love. Hildy’s a flawed but damned exemplary character you root for and who is instantly recognizable and relatable to so many. Luckily for us all, author Ann Leary’s penned heroine is well served by one of our best actors.

Weaver, the picture-perfect (Boston) North Shore go-getter, is making strides in sales and managing her two aggrieved daughters, Tess and Emily, and loose ends after a tough yet amicable divorce and an “ambush” of intervention about her drinking. There’s also the subtle backstory of Hildy’s mother, whose death she comes to terms with as the story unfolds.

Yet we are led to believe that Hildy seems to have it all nailed down as she offers pithy 20/20 observations of all her neighbors’ foibles but cannot see her own to save her life.

The Good House is a masterclass of Hildy’s crisply ironed New England wit and charm, getting on with her two steps forward, one step back, reinvented life. Add to that the wink of the breached fourth wall as Hildy gives the viewers her direct-to-camera underscore of each scene and the colorful locals who either grew up with Hildy or got to know her post-college and in business life.

These colorful Wendover locals dip in and out of scenes often punctuated by the four seasons and critical, emotionally triggering holidays like Christmas. This film is both a wicked good time and a gut punch, with Hildy’s alcoholism denial, actions, and revealing rehab recollections. Make sure to watch for brief moments with Beverly D’Angelo’s boozy Mamie and Paul Guilfoyle’s Henry, a 12-Stepper who knows Hildy better than she does.

Despite all the hiccups of alcohol, divorce, rehab recidivism, a precipitous financial footing, and an annoying local competitor Wendy (Kathryn Erbe), she’s an ace at negotiating (and renovating) prime coastline properties owned by townies and acting like everything is okay. Even her ex, Scott (David Rasche), to whom she pays alimony despite that he left her for a man, has her over for a propah civilized Thanksgiving dinner as old hurts are forgiven, buried under lattice pie compliments and post-dinner musical performances.

The villain in the piece outside of a rival realtor is Hildy’s alcoholism and the constant pull of the drink. The first high school love of Kline’s Frank Getchell has weathered like cedar planks, she’s still drawn to him, and he has aged beautifully as Hildy slowly turns to a mirror to examine what’s keeping her from her best life. Weaver is fiercely intelligent and magnetic and consistently commands a scene in all her work. And no other actress could have pulled Hildy off as Weaver does, making us cheer for her every step of the difficult way.

Writer-directors Maya Forbes and Wallace Wolodarsky, with screenwriter Thomas Bezucha, adapted Ann Leary’s book (Denis Leary’s best-selling novelist wife), and have done a superb job at showing how the ignored loose ends of our lives can be the undoing of the fabric that holds us together, and that the value of old and real friendships that stand the test of time is a priceless commodity to preserve at all costs.