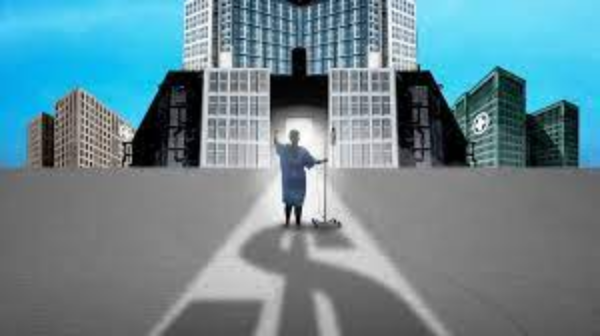 A new film called InHospitable is an indictment of the U.S. health care system, specifically the mega-hospitals disguised as non-profit organizations.

It should be said that it may have been a mistake to let a (full disclosure) Canadian review this film, because to those of us accustomed to a very different medical system, InHospitable plays more like a horror movie than a documentary.

The film focusses on a David and Goliath battle that played out in Pennsylvania over the ruthlessness of the University of Pittsburgh Medical Centre (UPMC), a behemoth that was prepared to cut off care for hundreds of thousands of people.

To squash the competition — Highmark Insurance — UPMC said it would no longer accept patients insured through Highmark.

The governor of Pennsylvania intervened and forced a five-year truce that was set to expire in 2019.

InHospitable picks up the story as the period of cooperation winds down.

Director Sandra C. Alvarez tells the tale of what’s at stake in in the UPMC debacle through the stories of individual medical patients, immediately getting a viewer emotionally engaged.

InHospitable exposes how hospitals have become the biggest single source of price increases in U.S. medical care in the last decade.

Alvarez sets the stage carefully. Inhospitable opens with the Covid-19 pandemic and what it revealed about the U.S. health care system — none of it good. So many Covid deaths in America, and such bad outcomes compared to other countries.

Your main guide through InHospitable is a nurse/patient advocate named Vicki Arnett, a tremendously charismatic woman who is helping her own husband through cancer treatment.

In the face of the UPMC standoff, Arnett and her husband have to fly to Atlanta, Georgia, to get the treatment he needs at a facility that will accept Highmark Insurance.

InHospitable counts down to the end of the 2019 agreement period, after which time patients insured by Highmark can no longer be treated by their doctors at UPMC.

That would be more or less a death sentence for a patient such as Evie Bodick, whose cancers and heart condition meant she saw five different doctors at UPMC. Once her insurance is refused, she’d have to seek out those doctors elsewhere, and she’d never find them all under one roof again.

InHospitable traces the history of U.S. hospitals and their transition from charitable organizations to big business over the last 50 years. No more nuns, and no more Marcus Welby MD.

A massive entity such as UPMC not only makes billions annually, it also wields immense power in the state — hospitals are the big community employers now and have the money to be massive political donors and influencers.

Hospital consolidation has meant declining wages for health care workers, and InHospitable makes a good case for comparing UPMC and contemporary hospitals to the coal mines and steel mills that were formally the big employers in Pennsylvania. Fully half of the UPMC staff are in medical debt to their employer (who is also their healthcare provider and their insurance provider), and the term “company store” is used advisedly.

The hospital is a monopoly. Hospitals are profit centres. Health care is big business. Everyone but the 1%, the movie explains, is at risk of financial disaster from even a minor health set-back.

Hospitals can cut costs on the backs of patients — the same patients whose tax dollar has paid for everything that allows the tax-exempt non-profit hospital to keep raking it in.

A grassroots movement is created in the fight against UPMC, and heartening though it is to witness, the film’s impact lies in the gobsmacking truths it reveals about the state of U.S. medical care.

How the U.S. spends 50 per cent more than other industrialized countries spend on health care but still stands dead last in outcomes becomes less of a mystery after viewing InHospitable.

Scary though it is, Alvarez’ film is also an homage to the heavy lifting done by women such as nurses and patient advocates. And you’ll see enough of Allegheny County Controller Chelsa Wagner, Pennsylvania state legislator Summer Lee, Pittsburgh reporter Natasha Lindstrom, author Elisabeth Rosenthal (An American Sickness), and Federal Trade Commissioner Rebecca Kelly Slaughter — with her baby snuggled into her shirtfront — to know they are exactly the sort of people you want around you in a crisis.

Which is to say: women.