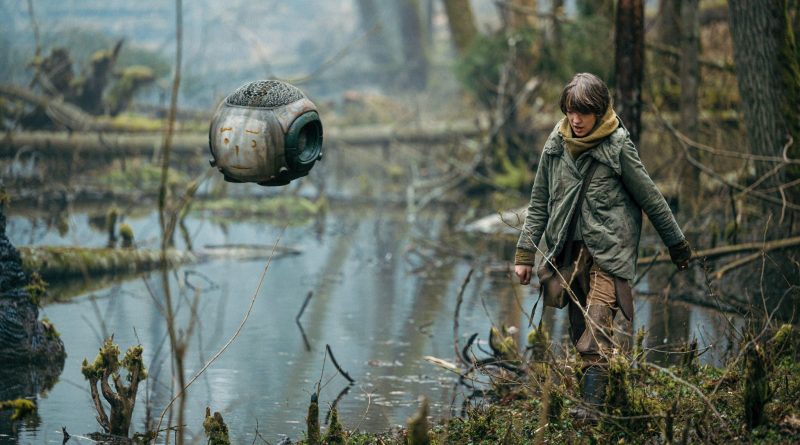 Holding a lantern that glows within mesh as if alive, a teen girl shows a visitor her greenhouse. In the dark, heads of lit polyps bob to attention, extending tendrils to touch their fingertips. “The little ones always greet me,” the girl says.

With a story as immersive as its lived-in world, the sci-fi adventure Vesper grabs the heart and the imagination. It unfurls ideas about ecology and social responsibility as gently and unobtrusively as those tendrils, with images and ideas that linger. It also features an engaging 13-year-old protagonist, curious about her world and wanting to make a better one.

Vesper (Raffiella Chapman, Miss Peregrine’s Home for Peculiar Children) lives in a small house with her father, Darius (Richard Brake, Barbarian, The Mandalorian), a war veteran paralyzed and unable to breathe or speak on his own. Tubes connect him to a lung that “breathes” in a cylinder while a hovering drone painted with dots for eyes and a simple mouth acts as his voice. Part of Vesper’s charm and its haunting quality come from Vesper’s interactions with the drone she calls “Pap,” like her dad, who is cranky when in need of a charge, despairing at times, and protective like the man himself.

Earth has reached a new Dark Age, its ecosystem gone, directors Kristina Buozyte (Vanishing Waves) and Bruno Samper (a writer on that film) establish during the title cards. People trying to stave off an ecological crisis turned to genetic technology, resulting in altered plant life and viruses that wiped out animals, edible plants, and even humans.

Those viruses didn’t wipe out human nature, though, or the class structure that often falls into place. While some like Vesper scrounge for survival, oligarchs live in enclosed “citadels.” Vesper imagines these enclosed spaces as scientific utopias that would welcome her and Pap if she could show them the new plants she’s grown. She believes, as the tagline says, that one seed can change everything. The skeptical Pap says she doesn’t know the cost of dreams.

The citadels have their own economy through genetically engineered laborers. They also trade with communities of survivors, such as one run by Vesper’s uncle, Jonas (Eddie Marsan, The Contractor), providing seeds that produce just one harvest. The curious Vesper wonders if she can unlock these seeds, giving them food to last a lifetime. She occasionally trades with Jonas, too, but won’t live under his rule. “You think you’re better than anyone else?” he sneers, even as he admires her spirit. They’re both determined not to let this world crush them.

The script by Brian Clark (Compulsion), Buozyte, and Samper uses Vesper’s independence from Jonas and the danger of raiders as the main tension until a glider from the citadel crashes nearby, stranding an injured Camellia (Rosy McEwen, The Alienist). Vesper takes her in, eager to learn about the world within those glossy walls. As longtime sci-fi fans might suspect, it’s not as beautiful as it seems.

The filmmakers cleverly reveal the organisms and “synthetic biology” of Vesper’s world in a way that’s matter-of-fact and absorbing, reminiscent of the world-building of Children of Men or Pan’s Labyrinth. Practical effects and puppetry blend with special effects to create trees that literally breathe from their trunks and fireflies that “shoot” from bushes like bullets. Some plants have an enchanting consciousness, with orbs that twinkle like lightbulbs, relaying their own morse code. Even the insides of Pap’s drone are squishier and more organic than circuits and metal.

Visually, Vesper is bleak yet lovely, with Rembrandt lighting from cinematographer Feliksas Abrukauskas (Cinephilia) and a muted palette of mossy greens and grays except for some browns and yellows in Vesper’s lab at home and in her plants: tiny spots of pink, blue, purple, and white.

The sound design is subtle. Viewers might not realize the nature sounds here are few until Camellia tells Vesper about the animals she’s seen, imitating their sounds—a cat, an owl, a wolf. Vesper howls at the top of her lungs, making both of them laugh. The soundtrack uses orchestral music, compositions from Dan Levy (I Origins) and a zither, an unusual instrument that sounds right at home in this world.

As Vesper, Chapman is fiery yet melancholy, a stubborn teen forced to grow up too soon. She’s vulnerable with her dad, Brake showing love and worry in his eyes, and guarded around Jonas, with Marsan showing menace behind his. McEwan plays Camellia first as an enigma, then someone who trusts enough to reveal her own secrets.

When the world’s gone haywire, people can fall in with what they already know or surrender, but neither is Vesper’s style. If a flower can change its purpose, anyone can, she says. Such are the seeds that the film Vesper plants, nurtured by a character determined to chart her own course.