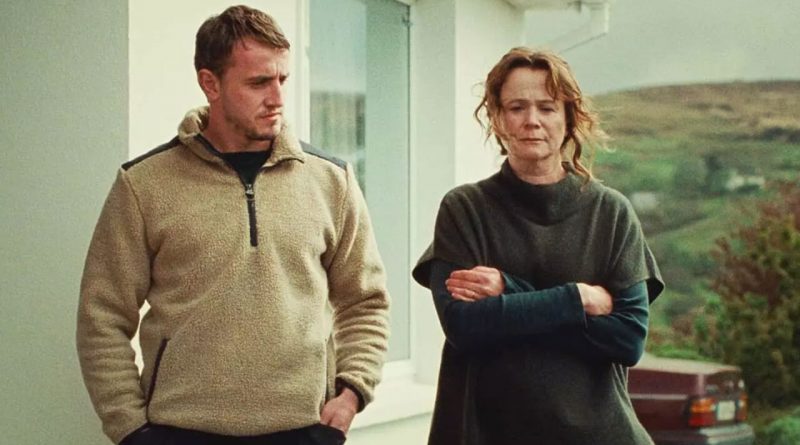 The absolute delight of his mother Aileen disappears when, shortly after Brian’s resumption of his oyster farming and pub visits, the police charge him with sexual assault. I can’t say more without revealing too much of the subtle and insidious affect this has on a close-knit, insular group of friends. As a fishing village, the economic support derives from the local processing plant where Aileen, a supervisor, and others involved in this tragedy work. The ripple effects profoundly impact the physical and psychological elements of all caught in the sphere of these events.

As Aileen O’Hara, Emily Watson anchors the film. In fact, in press notes, co-director Davis notes the opportunity in God’s Creatures to “re-imagine the archetype of a mother constrained to the role of bystander by placing her at the center of our narrative,” her interior life “as cinematic as those sweeping vistas.” As Aileen, Watson delivers a devastating performance as this mother facing traumatic choices. Paul Mescal as Brian O’Hara makes his behavior thoroughly believable, a critical element in this story both specific to the Irish locale and universal in its ethical ordeal.

Chayse Irvin’s cinematography effectively communicates this claustrophobic emotional world without any haste or flamboyance, composing cramped interior shots with shallow focus in the pubs and homes. These spaces contrast with the expansive seascapes and oyster beds that also figure prominently in the interactions. Throughout the film, Shane Crowley’s screenplay doesn’t waste time on insignificant details or unimportant dialogue. However, at several dramatic moments, Chris Foster’s sound design overwhelms the images and the mounting silent tension that would have worked better left uninterrupted. Unhurried, methodical, with time provided to contemplate the multiple crises, God’s Creatures invites thoughtful reflection.