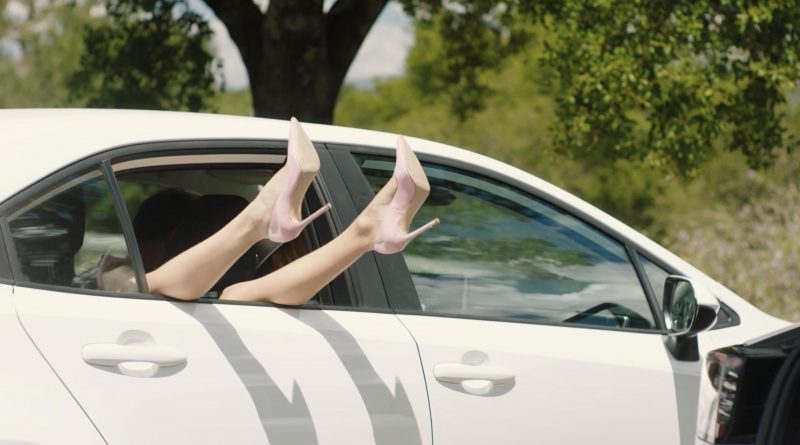 In the bitingly funny screwball comedy Pretty Problems, the grass isn’t greener in wine country; it just has people who water it while the hosts down another drink.

Before their getaway, Lindsay (Britt Rentschler, Uncle Frank) and Jack (Michael Tennant, Secret in Their Eyes) awkwardly try to conceive, then slouch off to work, each absently not listening when their partner speaks. On probation for reasons that become clear later, Jack goes door-to-door, offering solar panel installation, while Lindsay works in a consignment boutique.

When the eccentric Cat (J. J. Nolan, Hold Fast, Good Luck) breezes into the shop, she and Lindsay hit it off—so much that Cat invites her and Jack to her gorgeous Sonoma Valley estate for the weekend.

“That’s a murder house,” Jack observes, seeing the mansion from the road. Lindsay rolls her eyes. For her, this weekend offers excitement, the promise of friendship, and the chance to taste a lifestyle that feels out of their reach.

While murder isn’t on the agenda left in the guest room, Pretty Problems packs plenty of barbs between the wine tasting, karaoke, and spontaneous spiritual cleansing. The script by Tennant, working off a story by Rentschler and Charlotte Ubben (who plays another guest, the fall-down drunk Carrie), slyly weaves in Lindsay’s and Jack’s insecurities while the haves in this scenario name-drop elite locales like swirling wine in a glass. They include Cat’s husband, Matt (Graham Outerbridge, Natural Disasters), and Carrie’s boyfriend, Kerry (Alex Klein), who describes their meet-cute over cocaine in a way that’s anything but.

Also floating through the house are servants Becca (Katarina Hughes, Queen America) and Daniel (Clayton Froning, Walker), who turns out to be Lindsay’s old high school boyfriend. While that seems convenient at first, the performances and Jack and Lindsay’s fish-out-of-water dynamic keep the story moving at a brisk and engrossing pace.

Rentschler plays Lindsay as someone desperate to have someone believe in her—not just her husband, whose belief she takes for granted, but someone whom she aspires to be. As Jack, Tennant has a way of telling some harsh truths without sounding unloving, such as how it’s OK they’re not rich and likely won’t ever be. TK plays Matt as glib and easygoing, then reveals a flash of honesty. Nolan, meanwhile, gives Cat a Cheshire grin, a manipulator who swirls new people into her whirlwind until she inevitably becomes bored.

Pantera (Mother’s Little Helpers) and cinematographer Alyssa Brocato make the most of the lush, sunny setting and the ironies, framing Jack and Lindsay in the center of shots that highlight their unease. The couple’s heart-to-hearts in closeup cut through the weekend’s pixie dust, creating genuine concern about whether their relationship will survive.

Having enough money to live without care seems magical, Pretty Problems admits, but as one character observes, money doesn’t make your problems disappear. It just makes them prettier.