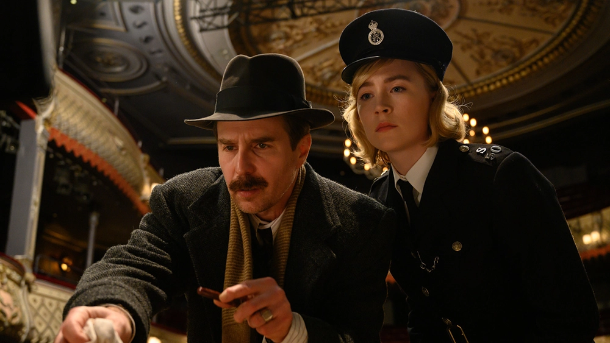 Some movies are just for fun. They do not educate or elucidate or elevate. They entertain. See How They Run does just that. The title refers to a nursery rhyme about mice, and that, in turn, refers to a play called The Mousetrap. The Mousetrap happens to be the world’s longest running play, having opened in 1952 for more than 28,000 performances.

The Mousetrap was written by Agatha Christie. See How They Run is even more entertaining if you have seen the play or read other mysteries by Christie — or are familiar with The Real Inspector Hound, a work by playwright Tom Stoppard about a theatrical murder mystery.

Stoppard’s name is borrowed for the weary inspector, played by Sam Rockwell with brilliant physical comedy, his forte. Stoppard is called in to investigate the death of a film director, Leo Köpernick, who was called in to negotiate the rights to direct a film of the stage play, celebrating its 100th staging in 1953. By tradition, the first death is that of the most unlikable character, and Köpernick fits the playbill. As Köpernick, Adrien Brody, who doubles as this film’s vocal-fried narrator, energizes the film-within-a-film.

By tradition, Stoppard (the detective, not the playwright) interrogates and cogitates until time to bouquet all personnel into one room. Tradition does not include the inspector’s sidekick, here named Constable Stalker (do pay attention to characters’ names), and, here, portrayed by daisy-fresh Saoirse Ronan, her blonde hair styled by the bobby pins of the day. She is a force on the force, quick to jeté to conclusions but very obedient. When Stoppard suggests she keep her eyes peeled, she blinks not.

See How They Run” is chock full o’nutty puns, especially mouthed by Constable Stalker. It is full of flashbacks, albeit some as weak as a 25-watt bulb; it is meta and ironic. It is frenetic and farcical and funny. It very much suits the “in” crowd, the cognoscenti who delight in catching allusions. Note, for example, references to Richard Attenborough, who was in the the original cast of Mousetrap. Enjoying See How They Run is helped by familiarity with the genre of the British murder mystery or even just by having seen Knives Out.”

Tom George directed a cast of thousands from a witty, knowing script by Mark Chappell. Amanda McArthur designed the production, and Odile Dicks-Mireaux designed the vintage costumes (do note the unzipped fly). See How They Run is just fun. But, as per tradition, do not give away “whodunit.”