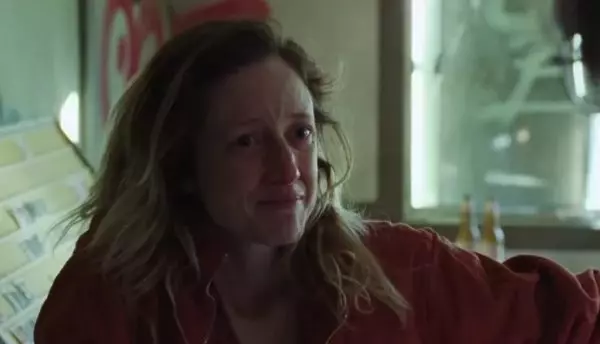 Andrea Riseborough gives the kind of knock down, drag out performance we’ve come to expect from this uncompromising and empathetic actor. To Leslie is a gritty, no holds barred portrait of a woman already on a fast slide to the bottom. An alcoholic single mother, she’s still infamous in her small West Texas town for winning and then blowing a $190,000 lottery jackpot. But when we meet Leslie, she’s already lost more than the money. Alcoholic binges, rage and desperate attempts to manipulate people who gave up on her long ago have alienated her 20 year-old son James (Owen Teague) and her once close friend Nancy (Allison Janney) who still seethes with resentment.

Riseborough plays Leslie with unfiltered abandon but without the flamboyance or sentimentality that often marks screen portrayals of addiction. She goes all in, allowing Leslie to be unlikable, embarrassing, untrustworthy — in other words, she delivers a bracingly honest portrait of addiction. At one of her lowest points, homeless and squatting in an abandoned ice cream shop, Leslie is thrown a lifeline by Sweeney (Marc Maron) who offers her a job cleaning rooms in exchange for a bed at his roadside motel. He’s a savior but Maron gives him shading beyond his self-effacing kindness. In one scene, his simple act of eating microwaved Salisbury steak from a dinner tray alongside with Leslie is a small step on a path toward her salvation.

For anyone who’s been down this far or had to witness anyone down this far, Leslie’s redemption may still seem to come too quickly without the vigilance of a program. But there’s no mistaking that the story is grounded in truth and in the power of Riseborough’s raw and gutsy performance. The downtrodden rural setting and unvarnished story is enhanced by Linda Perry’s soundtrack that includes pitch-perfect songs by Perry, Waylon Jennings, Willie Nelson, Dolly Parton, Patty Griffin and others. To Leslie is a rare movie with a central character familiar in too many lives but rarely done with such heart-wrenching accuracy on screen