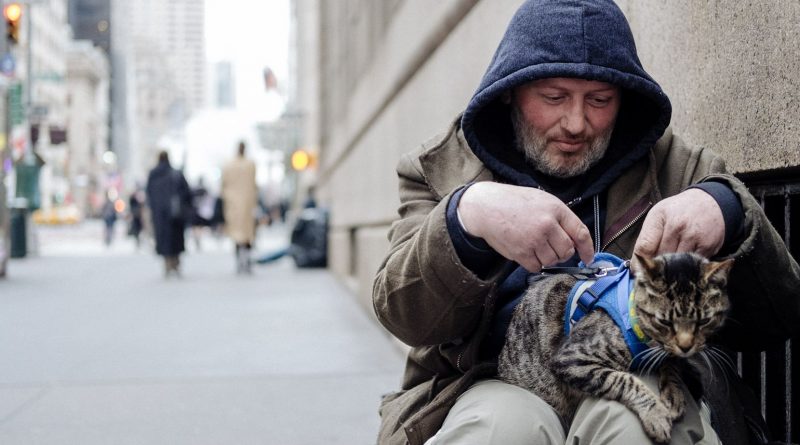 Though Cat Daddies sounds like the name of either a rockabilly band or a group you’d find in a kink dungeon, it’s actually the hashtag used online to describe feline-loving dudes, and as such is the perfect title for a new documentary from writer/director Mye Hoang, Cat Daddies. This joyful movie profiles a collection of 9 men, proud cat fanciers, who navigated 2020 with the help of their feline family members. At a time when many documentary and narrative feature releases darkly reflect the challenges, heartache, and cynicism resulting from a worldwide pandemic, Cat Daddies is as much a balm for the soul as a purring kitten burrowing into your hip. The film is a heartwarming charmer that shows men of diverse interests and backgrounds celebrating the unconditional love they have for their furry friends. That it will likely lower your heart rate and blood pressure significantly for the duration of its 89 minute running time should be all the reason you need to seek the movie out.

The unifying thread of the film is around David Giovanni, an unhoused construction worker with medical challenges living on the streets of New York with his cat Lucky, whom he rescued from certain death when everyone else was just walking by without notice. The bond between David and Lucky is clear, and at one point he even says the cat is his inspiration to continue living each day. His friend, New York policeman Chris Alese, himself the caretaker of a cat named Pez, says David and Lucky are like others experiencing homelessness. “They are at home with their animal, and if that’s on the street, that’s where it is.” Interspersed with scenes of David and his friend Chris are other stories of men and the cats they love. Nathan Kehn is an actor in Hollywood who built an account to almost 350k followers on Instagram with his funny videos and pictures of his four cats Pickles, Ginger, Annie, and Princess. All that influencing has led him to a job doing branding on a new dating app for cat lovers. Jordan Fide, a fire engineer at Belmont Fire Department, talks about the power of their resident cat Flame to calm the humans around him. Flame has become beloved by all the members of the firehouse. David Durst is a truck driver and caretaker for a cat named Tora the Trucker Cat. He and his girlfriend have hundreds of outfits for Tora the Trucker Cat’s Instagram account, @ToraTravels, which has 24k followers. Will Zweigart became passionate about saving as many cats in his Brooklyn neighborhood as possible, and founded Flatbush Cats, which has a robust catch, neuter, and release program for feral cats. Jeff Judkins hikes trails around the country with his intrepid cat Zulu. Stunt actor and trainer Ryan Robertson, who has worked on movies like The Suicide Squad, Avengers: Endgame and Black Panther, finds joy with his 26-pound kitty, a Maine Coon named Toodles. He says, “Toodles changed everything I knew about cats.” It was his connection with Toodles that led to his romantic partnership with fellow stunt person Megan Dovell, who calls Toodles her adoptive son. Toodles is in complete control of his domain. He calmly sits in the corner while Ryan and Megan spar and train with boxing mitts. Together, Ryan and Megan also care for a colony of feral cats they slowly catch for neutering and release.

Throughout history, women who live with and love cats have been mocked and degraded . Any woman over 30 with even one cat can be labeled as the stereotypical crazy cat lady and written off as a lonely spinster. Meanwhile, in the past, men who live with cats have been seen as less masculine or weaker. Only big, slobbering dogs have been acceptable props for masculinity. With Cat Daddies, Hoang shows we should crush those societal tropes, and give permission to anyone and everyone who want to embrace their inner cat lover. She explains her inspiration for Cat Daddies, saying “I have always loved cats. My husband did not. That is, until a cat found him several years ago. I watched over the course of a few years as my husband transformed into a bona fide crazy cat person. However, something else changed inside him — something deeper. I witnessed my husband’s growth as a more compassionate and sensitive human being in the midst of the discussions around toxic masculinity and the explosion of cat memes on social media. I wanted to explore modern masculinity and our new fluid gender roles in a film about men and cats.”

If you can toss away the thought that appreciating cats makes men exceptional, but rather really just means they are more in touch with the empathy and compassion inside themselves, as Hoang demonstrates in her film, Cat Daddies makes for great viewing. Pez’s friend Chris Alese said it best when talking about showing love to animals, including cats. “Being able to show compassion, that’s what leadership is all about. It’s redefining what strength looks like and how it’s more diverse and dynamic than we originally thought about it as.” Nothing looks stronger and more centered than someone showing love and compassion to a furry friend, and that absolutely includes cats.