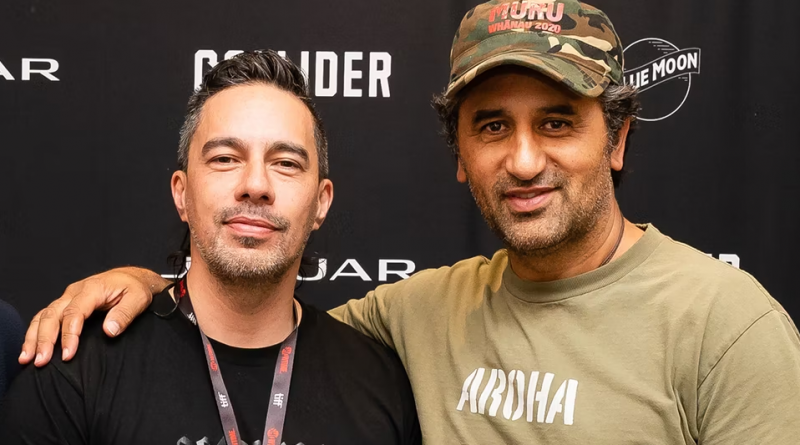 Racism, corruption, discrimination, greed and power. They all go hand-in-hand. We hope that at some point the world we live in will change for the better. But it does not happen. Are we just naïve to hope and still believe in miracles?

The story told in Muru, directed by Tearepa Kahi happened not too long ago. But when you look at it, you begin to ask yourself – how is it even possible for something like this to occur in our modern times? Not revealing much, I had the great pleasure of sitting down with director Tearope Kahi and actor Cliff Curtis, who provided insights into the film much better than I could.

Ulkar Alakbarova: Mr. Kahi, what drew you into this story and why did you decide to make a film as a response to the events?

Tearepa Kahi: As a Māori father and husband, my first reaction when I saw these bulletins, these news flashes come up on our local media screen, I couldn't believe that the police would ram right a sliding door that I knew was unlocked. So there was always a sense of injustice, or there was always a sense that there's a bigger story here than it's being presented to us, but I also had a personal relationship, a family relationship with Tame Iti and why I bring up the family is because any story that I want to undertake, needs to take my family into consideration and I want my kids to know that's not the story. And that's the way that I was taught. And so creating an opportunity with Tame Iti, Hoy, and Cliff to tell a story that was a response to not only the events of that one day but a much deeper, broader, longer context than campus, is about ensuring that our families are all protected.

Ulkar Alakbarova: Mr. Curtis, how about you? I know that probably the moment you got the script, perhaps you wanted to be part of it but what was the reason for you to be in this film? Because eventually, films just tell a story of what we feel that might resonate with us. What do you think resonated with you when you said, "I'm just going to be a part of it, I'm a busy man, but who cares?".

Cliff Curtis: Well, my initial motivation was probably seeded well before this screenplay was written and it was in the relationship I had with Tame Iti. I knew him as an artist. I knew him as a political activist, and as a fascinating human being, the exchanges I had with him were very interesting. He’s a very diverse character, a restaurateur, a DJ, a painter, a dancer, and political activist. His body, his face is actually a part of his artistry as he is. So I was fascinated with him as a human being, his intellect, his academic prowess and his connection to his culture and his heritage and the way he lives his life within his community. So that's the first I mean… Yeah, I want a piece of that, and then there was the absurdity of the political agenda that was constructed to take him down his profile and Herman's communities as a domestic terrorist cell.

Chanipu and I go way back. So we go back a couple of decades easily, developing short films and things together and then there was the reading of the script and it was, "That's interesting. You want to make an action movie? You want to make an action movie, a political thriller, and you want to make a response, not a reaction." I think I was really challenged by that. I did not instantly want to do that. We did whiteboard sessions, and for me, it was about processing all of that. There's the opportunity to work at a level of craft where we can depart the tropes of protagonist antagonist sort of duality and get into the community and have the nuancing of spectrums of humanity failing itself and trying to find a way forward. That's great. That's pushing the form. That's pushing the craft. You get to lean into that. I love that. That's great for me, selfishly.

Ulkar Alakbarova: So the character you portray and the character you are showing us is very conflicted in the sense that he knows that he needs to fulfill his duty. If you're carrying the police badge, you have to put everything aside and do it because you need to blindly believe that what you are taught is what it is.

Cliff Curtis: Very astute. Thank you and very well articulated. A man of duty, a man of honor, a man of principle, a man of the law, a man, a policeman in his community, trying to do the right thing, when his institution is asking him to act against his own people, his own family, and something that he knows is not true, that he does not believe and he has to choose between his identity as an individual, his life's identity as a policeman to enact an injustice against his own family, and he has to choose and how does a man, a good man, a man of principle, a man of honor and duty do the right thing in that situation. So in terms of acting and craft and storytelling, it's a great opportunity. It's to work out the nuances and the spectrum of possibilities in that. Yeah.

Ulkar Alakbarova: I got to be fair that the entire cast has delivered on their part, but for you as a filmmaker, you need to envision the entire thing in your own way so that you can be every single person on set. How did you envision that?

Tearepa Kahi: How? With great hope and faith and relationships but in terms of the crafting of this dynamic, chessboard and ensemble cast and even my nephew plays the young boy in the bus, I would say it was challenging, but there's a greater responsibility sort of overriding all the worry of, “are we going to get the performances?” And we have a responsibility to bring out the best in each other, and the best is the most difficult or the most challenging or the quietest moment or these moments of doubt or a moment where all your beliefs are shaken and the belief system that you have. Your loyalty is tested. So I had a good roadmap. I've had a lot of relationships. I've had a father who's been in this place and seeing him being tested between loyalties is something that I understood. I've been a difficult 15-year-old. So there was a lot of deep well of experience to draw on. But then we had such an exciting cast where they were able to encapsulate things so quickly and walk forward into these unexpected places. Because we were on location and because Cliff was a big part of it and because Tommy was a big part of it. So I don't mean that everyone was slipstreaming, but because there was this huge element of authenticity, we didn't have an actor playing Tommy. Tommy is here. We're shooting at the location where the raids took place. For everyone, I'm sure, that was a huge resource and wellspring to draw on.

Cliff Curtis: Can I jump in there? When I started watching the early cuts of the film, affection, love, intimacy, and respect. Those are qualities that I saw, how they conducted themselves within that community and I don't think that you could have captured… You could have technically captured what you did as a director. Had you not brought those qualities to your work? I think that's really the secret source to it personally. That's what I observed. That's my experience.

Tearepa Kahi: Well, his answer's better than mine. (laughs)

Cliff Curtis: I will defer.

Ulkar Alakbarova: So do you find it ironic that the government always tries to say that? I mean avoid the casualties, make no mistake, and make sure no one is hurt. Yet in this film, only when kids got involved did they realize their mistake.

Cliff Curtis: Well, that's what happened in 1916. That's what happened in the first raid. There are so many strains. This is a fictional movie. This is storytelling, but I was watching it last night, and I was getting emotional because it has so many moments. This is not just a response to 2007 but 1916. Maybe 200 years of events between government agency forces against this specific tribe and people and… I was getting emotional because even though it's fictionalized and storytelling, there are so many things you are pointing to in terms of a movie called Muru, which can be translated to mean forgiveness. Oh God, there are so many things coming up. For me, when you're telling a story. When you're making a movie, you don't have a story. You don't have a movie until you have the ending and to me, the ending, the last frame of this movie is when we have our story, that's the story we're telling. There's a lot going on. There are a lot of characters. That's a true story. So many events can happen. And so for me, the truth is that these social multi-generational traumatic events are not easy… It's really difficult for us to take responsibility as a community, as a nation with our government to ask them to take responsibility, to ask ourselves, how do you take responsibility? Remembering or telling a story or dissecting or examining it ourselves and being honest about the impact of these events in our society. I don't know whether I'm answering a question at all. But what you've brought up is a whole lot of things, and I really appreciate the question, and the possibility to speak on it.