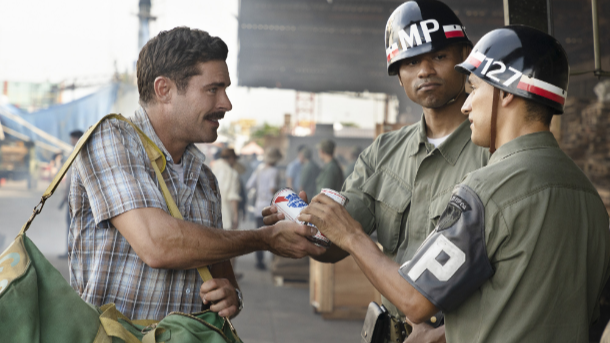 The Greatest Beer Run Ever could have been just another bromance or a boy-farce, like The Hangover. It is more than either sub-genre, much more — maybe because it’s based on a real story, as farcical as that is. The film is well realized. John Donohue, called “Chick,” made his beer run to Vietnam in 1967. He had been in the military earlier, stationed in his home state of Massachusetts.

Now, home, he goes to his local bar every night. There, the war in Vietnam is on everyone’s mind and TV. Donohue supports the soldiers over there, who are fighting for America against the “reds,” the Commies. He is embarrassed by his sister’s protesting against the war.

Like the other barflies, Donohue bemoans the loss of childhood friends as news arrives of one more death “in country” or of a man missing in action. So Chickie has a brilliant idea: to support the boys, he makes a beer run to ‘Nam with Pabst Blue Ribbon in a canvas bag.

What he finds there is not at all what he thought he would. He wears civvies that include a plaid shirt, so he is taken for a member of the CIA. He does not disabuse the working soldiers of that assumption because it’s what gets him to air bases and to his friends.

What he sees with his own eyes in the fight belies what he hears on television sets, especially General William Westmoreland’s lies to America. Donohue realizes that this war is really “mass murder,” on which a helpful journalist expands: “That’s what war is, Chick. It is one giant crime scene.”

Zac Efron handles the role of Donohue, “a guy too dumb to get killed,” with acting aplomb, not depending on star quality or good looks. Two other actors turn in fine work in The Greatest Beer Run Ever: Bill Murray plays the WWII-veteran and bar tender, and Russell Crowe plays Arthur Coates, a photojournalist for Look magazine. Crowe is especially magnetic, and Murray is articulate. They speak well the lines written by Brian Hayes Currie, Pete Jones, and Peter Farrelly, based on Donohue’s memoir of the same title as the film.

Farrelly directed the film with more of the sensibilities of Green Book than of There’s Something About Mary. The battle scenes are as well produced as the family and friends scenes. The Greatest Beer Run Ever honors Donohue’s memoir and the memories of his friends.