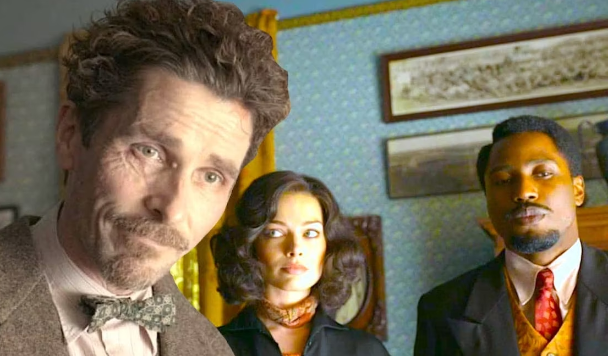 Amsterdam: “I left my eye in France”

Amsterdammmmn! A doctor, a nurse and a lawyer walk out of a bar and witness a murder, but the jokes on us. David O. Russell is known for putting A-List actors in tragic- comedy situations (Silver Linings Playbook, American Hustle) and he’s done it again on an epic scale by adding in
a side of Wes Anderson and Taika Waititi.

Set mostly in 1933 New York City, Amsterdam is the “sort of” true story of three friends who not only find themselves accused of the murder they witnessed, but knee deep in one of the most secret plots to overthrow the White House in American history. There’s experimental plastic surgery on WWI veterans, antisemitism, fascism supporters, sterilization clinics, big business and powerful people who do the craziest things. Eyes roll, literally and physically.

Russell wrote, produced and directed Amsterdam…in English, but it might as well have been in Dutch. It took 90 minutes into this 134 minute farce for me to somewhat get what was going on and that was only because I recently watched the Ken Burns documentary, The U.S. and the Holocaust. The saving grace is the acting. Everyone seems to be having fun and Christian Bale could be on an early list for Best Actor for his facial expressions alone.

Amsterdam is not just a Who Done It, but a What Is It. Bring your passport, you may not know where you are going next. My husband, Ricky, stayed awake, but wished he had fallen asleep. Amsterdam gets a 5 out of 10.