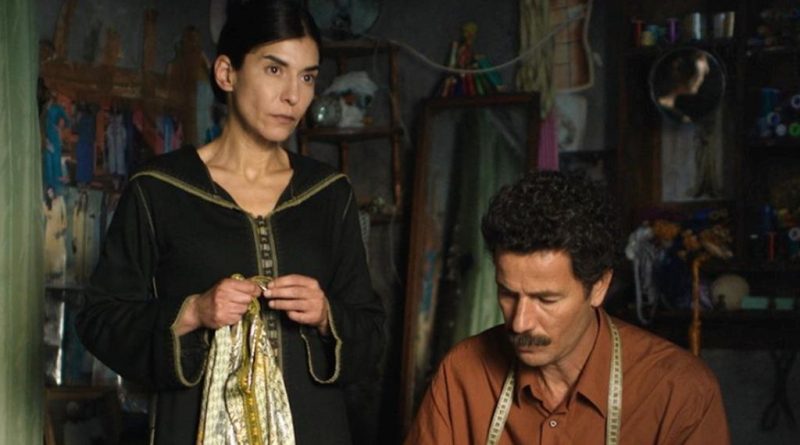 Saleh Bakri and Lubna Azabal deliver moving performances as a traditional tailor and his wife struggling to make a living in one of the oldest medinas in Morocco, in writer/director Maryam Touzani’s moving, thought-provoking human drama The Blue Caftan (Le Bleu du Caftan). Although the drama features a traditional craftsman practicing a fading art, at its heart, The Blue Caftan is really about love in its various forms, romantic love, a love of a craft, and more. It is also a showcase for some striking performances, particularly from Lubna Azabal, in the story that takes surprising twists, and is by turns powerfully dramatic, funny, touching, or heart-wrenching, as this excellent French Moroccan, Arabic-language film unfolds.

Mina (Lubna Azabal) runs the front of the shop for her tailor husband Halim (Saleh Bakri), one of the few remaining traditional tailors in the old Moroccan market, the medina. When we first meet her, Mina is a tart and no-nonsense person who keeps the business humming while artistic Halim is more easy-going and a bit of a soft touch. As a couple, they make a good team for the business. Mina is irritated when customers are slow to pay or do not fully appreciate Halim’s remarkable skill, but she is also maddened by Halim’s tendency to give in to demanding customers.

While they are not flooded with customers, they have managed to make a living from those who recognize Halim’s skill and his fine, hand-made caftans. Halim is practicing a dying craft, as quickly-made, cheap machine-made caftans replace his pricier, time-consuming hand-made ones. Because hand-made clothes take time, they struggle to keep up but having their new assistant, Youssef (Ayoub Missioui), allows the shop to keep on top of things. While past assistants have come and gone quickly, without showing any interest in learning the trade, Youssef is different. The young man has become an apprentice as well as an assistant to Halim, who obviously enjoys passing along his knowledge and his high-standards for his work.

At the start of the film, Halim gets an order to create a very special caftan, to be made of a gorgeous blue silk and trimmed in gold, for wealthy woman who wants something outstanding for a special occasion. As Halim works on this lovely garment, he starts to pour all his well-honed skill into the blue caftan, and it becomes clear that is one of the best garments he has made in years, a masterpiece. Still, the woman who ordered it is impatient for him to finish, and Mina worries about getting paid at all, as this customer is known for being slow to pay.

A scene in a bathhouse reveals Halim to be a closeted gay, and when he then seems to be attracted to his handsome young assistant, Mina becomes alarmed. At this point, you may think you know where this story is going but you would be wrong.

What follows is something wholly unexpected, a story of that takes us on a different path that delves into the nature of complexity of real life and real human relationships after a pivotal development, To say more risks spoilers, but from this inflection point on, the story just keeps getting richer and deeper, and the characters become more complex as we learn more about the people, particularly the couple, in it.

What makes this film so magical are the performances of the actors, particularly Lubna Azabal whose Mina emerges as the central figure in this character-driven drama. In the face of adversity, Azabal seems to grow and expand from the bitter, disapproving wife we first meet into someone else, a remarkable, luminous being who loves to dance and lights up a room she used to be, embracing a kind of freedom and joie de vivre in the face of daunting events. While Azabal dazzles with the depth and layers of her performance, Saleh Bakri is also excellent as the more reserved Halim, who we discover adores his wife and why. As Youssef, newcomer Ayoub Missioui does well, although the acting heavy lifting is done with brilliance by Lubna Azabal and Saleh Bakri.

Besides the moving human story at its center, The Blue Caftan effectively highlights a fading traditional profession and the artistic and craftsmanship skills that are being lost forever. Writer/director Maryam Touzani is from Tangiers and knows well both what is being lost as centuries-old traditional skills such as Halim’s are not passed on and the difficult situation of people forced to live hidden lives by societal restraints. The former issue is illustrated in one sequence, where an elderly customer comes in with a caftan she’d like repaired, something she had inherited. Halim admires the ancient garment’s fine craftsmanship but tells her sadly that no one knows any more how to make the kind of buttons she needs replaced, that the knowledge has been lost. Still, he offers to try to find old buttons to replace them.

As we learn more about the couple’s story, we can’t help but be moved,and then the plot takes us even further, becomes both more complex and taking us into new emotional territory, which becomes strangely freeing as the film moves towards a conclusion that is warmly human, heartbreaking, bittersweet, and ultimately inspiring.

This is a remarkable dramatic film that offers an unexpected human story and profound insights on human love in all its forms, told through luminous performances and the director’s perfect touch. The Blue Caftan, in Arabic with English subtitles, was shown at the Toronto International Film Festival and is set to open in US theaters in 2023.