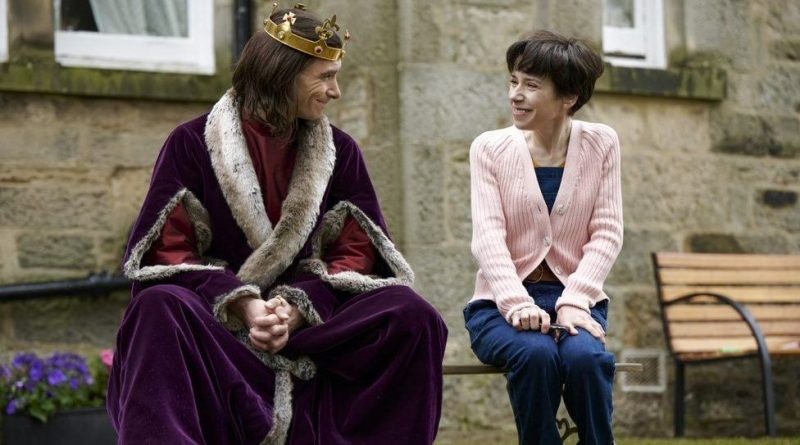 Stephen Frears’ true story-inspired comedy-drama The Lost King is a charmer with a thoughtful underdog theme, starring the wonderful Sally Hawkins as an amateur historian who locates the long-lost grave of King Richard III, the last Plantagenet king. The grave’s location had eluded professionals for centuries. The discovery made headlines around the world, but even better, was that the person who pulled off this discovery, Philippa Langley (Sally Hawkins), was an ordinary middle-aged woman who turned amateur historian – or maybe history detective is more apt – after seeing a production of Shakespeare’s play. Curious about the real Richard III, Philippa turned out to be a determined, methodical researcher, whose willingness to follow leads others had missed and do the legwork led to this startling discovery, and a re-assessment of the true history of the last Plantagenet king.

It is a heck of an underdog story, played with immense appeal by Sally Hawkins. Philippa battles a host of obstacles besides scarce historic information, including skepticism from government officials and dismissive attitudes by academics, who treat her as an outsider when she tries to enlist their help in the search. There is plenty of warmth and humor in this true-story based comedy-drama about an unlikely discovery of a lost king by an even more unlikely person. But The Lost King also touches on another topic, the common human flaw of making assumptions, often unconsciously, about people based on their appearance.

Richard III was famously described as hunch-backed and lame, and historically his physical flaws have been conflated with moral failings. After all, it is the victors who write the history, and when Henry Tudor defeated Richard Plantagenet in battle, the Tudors had plenty of reasons to cast Richard III as a villain. He certain is that, in Shakespeare’s Richard III where he is one of the great villains of literature. But is that fact or fiction? It has long been a human failing to often attribute goodness to the more attractive and character shortcomings to the less attractive, despite the lack of any connection. This is part of what speaks to Philippa, who has also endured false assumptions about what she can do.

Steve Coogan (who plays Philippa’s husband John Langley) co-wrote the script with Jeff Pope. Steve Coogan, Jeff Pope and director Stephen Frears are the same team that gave us Philomena starring Judi Dench in another story about an ordinary woman who does something extraordinary.

However, The Lost King is a bigger story, and a deeper detective tale, as we follow one woman’s quest to both find the long-lost final resting place, and uncover the true history, of a British king she believes has been falsely maligned – a search for the real Richard III in both senses. The fact that this middle-aged woman, with no special skills prior to embarking on this quest, also suffers from a debilitating health problem, apparently chronic fatigue syndrome (which she repeatedly prefaces by noting it is “a real medical condition”) has herself been dismissed, overlooked or maligned for her physical problems, adds another dimension to the story. The story also takes a look at the way people often are judged based on physical appearance rather than who they really are.

Set in in Edinburgh, the film opens as Philippa is anticipating a promotion that both she and her friends at work think is a sure thing for the hard-working, experienced long-time employee. Although Philippa’s chronic fatigue syndrome sometimes causes her to miss work, she has never missed a deadline in her long years at the company and does good work. Instead, the job goes to a pretty blonde young woman, a recent hire with far less experience. When Philippa asks why, her boss tells her he thinks she is “at the right level” and management wants “new blood,” but she suspects it has more to do with the fact that she is a less attractive middle-aged woman with a chronic illness.

At home, Philippa takes over from her husband John (Steve Coogan), from whom she is separated but shares custody of their two young sons. Despite being demoralized by what happened at work, Philippa takes her son to a production of Shakepeare’s Richard III, a school assignment for him. Watching the play, Philippa was moved by the performance of the actor playing Richard (Harry Lloyd) but also struck by how the play linked Richard’s unattractive appearance to an evil nature. It is easy to see why Philippa might identify a bit with Richard III, and she begins to wonder if he was really as bad as history says, or if people just attributed evil to him because of his misshapen body.

Skipping work the next day, Philippa begins to do research on Richard III, who she had discovered was not a contemporary of Shakespeare, as she had been told, but lived about 100 years before the play was written. She visits a bookstore, where she finds more information but also learns about a local Richard III club, who believe the king has been mistreated by history. Some of the club members are offbeat but others are more serious, and she gets leads on historians who have written about Richard. From them and her own research, she learns forgotten facts like that Richard established the principle of “innocent until proven guilty” and was a supporter of the then-new printing press.

She also learns that the location of his grave has been lost for centuries. Gradually, Philippa becomes obsessed with uncovering the truth about Richard – and then with uncovering Richard himself. The hunt becomes more and more all-consuming, so much that she starts skipping work – something she conceals from her ex-husband. She also begins to see visions of Richard (Harry Lloyd again), eventually taking it as a sign that Richard wants her to find his grave.

While she gets help from the historians she meets, Philippa is the one who does the legwork and puts the pieces together. When she finds a possible location for the grave, she sets out to enlist the help of academics for a dig, but faces skepticism and is dismissed as an outsider.

The real Philippa Langley, who was a consultant on the film, did not actually have hallucinations of Richard III but putting them into the film introduces a little fantasy and whimsy into the story. While the imagined king adds a little fun and some colorful costumes, it does sort of undermine the film’s message about taking Philippa seriously if she’s seen talking to thin air as she addresses the ghost of the king.

The film is very much Philippa’s version of this story, with the real Philippa Langley involved from the start, and some of the other real people involved have objected to how some events are portrayed. But this is not a documentary – it is a charming fictional film about an outsider who sees things the experts missed and has the determination to dig in and uncover the facts. In this case, that includes the bones of a king under a parking lot. The discovery of Richard’s grave did spark new research and a re-evaluation of the last Plantagenet king, very much as Philippa wished.

Sally Hawkins plays Philippa brilliantly, letting us see all the flaws and insecurities of this ordinary middle-aged woman, who is miffed at being so overlooked. Hawkins is a gifted actor who has given a number of wonderful performances, often playing someone who has been overlooked, and some audiences may remember for her starring role as the deaf woman in The Shape of Water, but this one role might be among her best, playing a multilayered, complex character who shines despite her challenges.

The film very much rests on Hawkin’s excellent performance but she gets good support from Steve Coogan, who as Philippa’s husband John, is a delight as well. John is a good co-parent to their boys but he exasperated by Philippa’s new interest at the start, although he winds up being more supportive than expected. Harry Lloyd plays both the apparition of King Richard and the actor in the play Philippa attends, and does a nice job both as mostly-silent king and the expressive actor.

The film also adds a little bit of whimsy and fantasy by having Philippa see visions of King Richard, played by the same actor she saw in the play, Harry Lloyd. Harry Lloyd is no relation to the famous silent comedian Harold Lloyd but he is a descendant of another famous person, Charles Dickens. Lloyd’s King Richard is solid rather than ghostly – a regal, mostly silent presence who appears unexpectedly and encourages Philippa, as well as giving her someone to talk to about unraveling the puzzle.

The story is so unlikely, and Philippa herself is so quirky, that the tale lends itself easily to comedy. But Sally Hawkins plays Philippa with such charming warmth and humanity, that she wins our hearts no matter what she does. Everything in this underdog fantasy tale works well to create a crazy underdog story that gets under the skin.

The story takes some surprising turns and has a lot to say about how people are sometimes treated and about how pre-conceptions shape that. Ultimately, The Lost King is a celebration of an underdog, a determined woman who did the research to uncover what professional historians had been unable to do: find the king buried under a parking lot and discover new truths along the way.

The Lost King premiered at the Toronto International Film Festival and is set to open in US theaters Oct. 21.