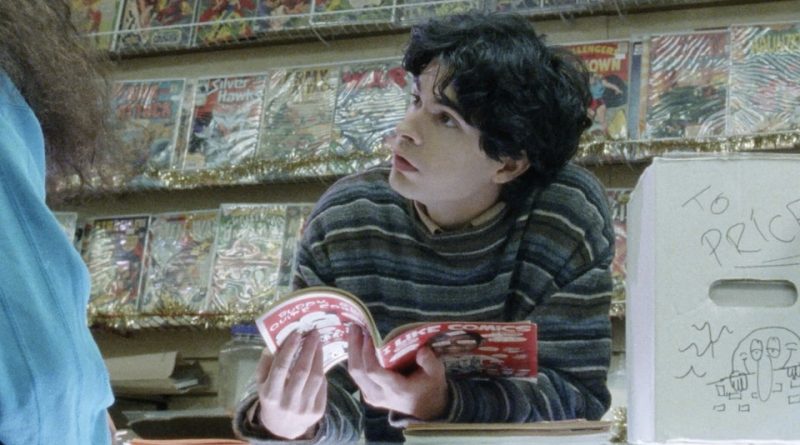 Writer/director Owen Kline’s Funny Pages is a sly, clever film. Just when I thought I knew exactly where it set its sights, the story heads off in another direction, much to my delight. That’s because most plots follow a conventional trajectory, one reinforced by dozens, if not hundreds, of predictable literary and cinematic works.

It’s so refreshing, then, to watch an unexpected take on a high-school dropout who dreams of succeeding as a comic book artist. Invoking a cliché here, teenager Robert marches to the beat of a different drummer. In a droll diner scene, his parents, Lewis and Jennifer, insist he attend college. Robert admits he’d rather work at a gas station. Thus begins his unique journey which takes him, eventually, to a clerk’s job at a comics store and a horrid, shared basement apartment in Trenton, New Jersey.

Along the way, Robert gets tutoring from an unhinged high school teacher, works part time for a Public Defender who got Robert a court release, and befriends Wallace, an Image Comics color separator with serious anger management issues. There’s more, including an informed, credible portrayal of those who obsess over and create unconventional comics, but, in fact, Robert’s entire world is populated by unusual characters.

The son of native St. Louisan Kevin Kline and Phoebe Cates, director/writer Owen Kline, who has The Squid & the Whale in his acting credits, demonstrates a talent for presenting atypical characters as three-dimensional, realistic individuals, even those in supporting roles. As Robert’s father and mother, Josh Pais and Maria Dizzia project the convincing reactions of real parents, so rare in any Hollywood film. Similarly, Robert’s acne-plagued, sometime friend Miles hangs around and behaves as so many teenagers do, even through some bewildering situations.

As Robert, Daniel Zolghadri guides events with appeal, even through startling developments. Equally strong are Matthew Maher as Wallace and Miles Emanuel as Miles. Reminiscent of the fictional Ghost World and the documentary Crumb, Funny Pages adds a complementary entry to the wonderful world of those who don’t conform to formulas.