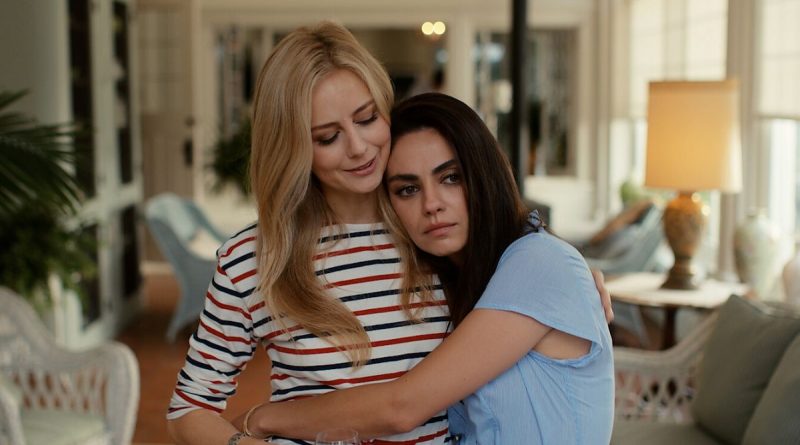 The Netflix film Luckiest Girl Alive is secretly a drama tucked inside a mild thriller about how one woman’s traumas affect her years later. While this is a worthwhile topic, its creators seemed to think no one would pay attention without flashbacks of assault, knives dripping blood, and the soundtrack zinging in place of suspense.

Ani (Mila Kunis, Four Good Days) appears to have it all: a wealthy and handsome fiancé (Finn Wittrock, Deep Water), a high-powered magazine job in New York City with an adoring boss (Jennifer Beals, The Book of Boba Fett), and a glamourous upcoming wedding with a sky’s-the-limit budget.

Yet circling her is a documentary filmmaker (Dalmar Abuzeid, In the Dark) revisiting a shooting at Ani’s elite high school roughly fifteen years earlier. Dean (Alex Barone, How I Met Your Father), a survivor turned gun control advocate, has talked up her friendship with the shooters, accusing her of being involved. Ani has never spoken about this publicly. Will she go on the record now?

Adapting her 2015 best-selling novel, writer Jessica Knoll, also a producer, juggles various plot threads, but Luckiest Girl Alive still has a jarring mix of elements that might have worked better on the page. High school Ani endured both the school shooting and a gang rape involving Dean, events that separately would leave anyone reeling and together give viewers a lot to unpack.

Director Mike Barker (TV series Fargo and The Handmaid’s Tale) shows both events in detail, which makes for a difficult watch. Some viewers may find parts of this exploitative, in spite of a website listed before the credits for anyone who has experienced sexual violence or struggles with mental health.

All that’s a shame, because there’s a decent film in here somewhere about trauma’s ripple effects and people’s coping mechanisms. Ani cultivates an elegant but tough image, dryly dashing off pitches for sex stories and racy cover lines. Yet Kunis, also a producer, shows the insecurity, self-hatred, and anger below this facade. Ani stabs a straw into a drink when asked if she prefers the term victim or survivor (she hates both) and erupts when someone wonders why she has to carry these events with her all the time.

The film at first presents her as an unreliable narrator, complete with often-unnecessary voiceover narration. Ani talks about being a wind-up doll that says what she thinks people want to hear. She scarfs down two slices of pizza while Luke, her fiancé, is away from a restaurant table, then lies about what happened to the potential leftovers.

Luckiest Girl Alive tries to create mystery around Ani’s assault and her part in the shooting using quick cuts of closeup flashbacks, stingers of music for emphasis, and lots of reflections of Ani, some fractured. Yet its main dramatic tension stems from her deciding whether to participate in the documentary, tell her story another way, or keep up appearances. This is intriguing enough, especially because Luke and a close friend (Justine Lupe) seem to know all about her past.

Ani, however, is still fearful of the fallout. Aside from a sympathetic teacher (Scoot McNairy, C’mon C’mon), high school Ani was treated like a slut. Chiara Aurelia (Cruel Summer) plays her tearfully insecure, no match for a mother who literally blames what happened on Ani’s bra size. Connie Britton (The White Lotus) has the thankless job of playing adult Ani’s mom, often swigging a drink.

One of the better parts of Luckiest Girl Alive is how Ani collects respectability like armor, whether it’s a job offer for the New York Times Magazine, her relationship, or marrying into wealth. She thinks these make her reputation beyond reproach, reassuring her that she belongs, that she’s worthy—and that she’ll be believed.

Unfortunately, the film adds another squirmy bit of business by making Dean not just one of Ani’s rapists but someone whose injuries from the shooting left him using a wheelchair. Several passing characters refer to him as an “inspiration”—a label he and others are happy to embrace. One even wonders when Ani mentions her rape if Dean has already suffered enough.

As a thriller, the jolts just aren’t there, and ginning up those elements saps Ani’s journey of emotional weight. While the filmmakers no doubt meant for that part to be empowering, good intentions and an anthem-like song from composer Linda Perry (To Leslie) can’t help Luckiest Girl Alive from feeling like an unfortunate mashup.