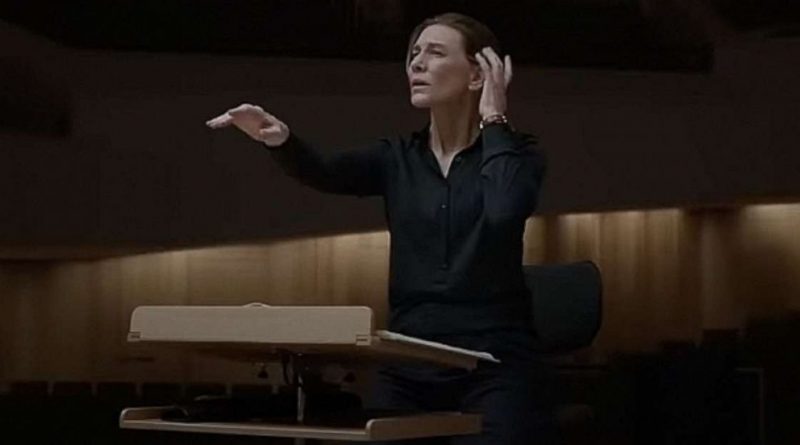 Writer/director Todd Field’s captivating TÁR opens with real “New Yorker” writer Adam Gopnik in an extended Manhattan stage interview with the fictional Lydia Tár. This establishes her career highlights as well as her emphatically egotistical persona, anticipating what follows in Lydia’s personal and professional life as the first conductor for the prestigious Berlin Philharmonic preparing to record Mahler’s fifth symphony.

Lydia also teaches master classes at Juilliard (great scene of a class there), is married to the orchestra’s concertmaster (a wonderful Nina Hoss), guides diverse business decisions, and has an adopted, young daughter. Above all, however, her self-absorbed character’s emotional control will begin to slip away in unexpected ways through fascinating, always clearly motivated developments that would be criminal to reveal here.

As Lydia Tár, the amazing Cate Blanchett embraces and embodies Lydia’s strength and fragility. She’s forceful, accomplished, and extremely manipulative, as discussed by Blanchett after TÁR’s Telluride Film Festival screening this past September where I first saw the film. Blanchett described Lydia as both a victim and a perpetrator, ignoring alarms in her own life, and fighting the nefarious corporate Board and shareholders. Probing all Lydia’s attributes, including “the ability to turn extreme anxiety into excitement,” Blanchett’s Tár rules her world with unflinching confidence and abusive, unscrupulous bravado. Over two and a half hours (and I didn’t want the film to end), the character arc Blanchett navigates from self-assured power to nightmare fears to intractable complications provides a thrilling, mind-bending ride with a great actress conquering an exquisite role.

As always, Cate Blanchett overwhelmed me with an inspired performance. For the role of Lydia Tár, she learned German, relearned her early piano expertise, and acquired the complex aspects of conducting an orchestra. None of these daunting elements feel even minimally forced or unnatural as she completely conquers the role of Lydia. Of utmost significance, while the film celebrates uplifting and even exciting music, it finds and excavates the fatal flaws in Lydia’s Tár’s celebrity, a powerful message for our time of worshipful veneration of influencers and luminaries.