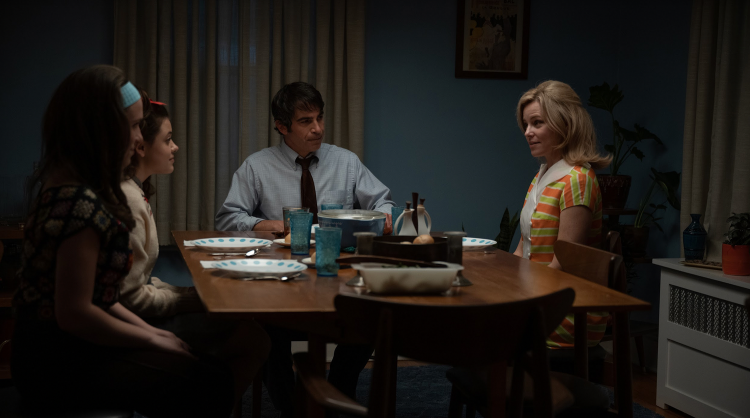 A quietly powerful film about a woman’s feminist awakening, Call Jane is different from two other recent films about the Jane Collective which operated from 1969 to 1973 in Chicago and helped women obtain safe abortions when it was illegal and dangerous to do so. The documentary The Janes from earlier this year profiled the real women in the collective. Ask For Jane (2019) detailed the formation of the group by young women activists who saw reproductive rights as central to women’s liberation.

In director Phyllis Nagy’s Call Jane, it’s suburban homemaker Joy (the excellent Elizabeth Banks) who finds her voice in the movement when her pregnancy threatens her life. Despite the dire prognosis, no doctor is willing to perform an abortion and she’s condescended to when she appeals to an all-male hospital board. Joy calls “Jane” and learns it’s not one woman but many; indeed, as one young member tells her, “we’re all Jane.”

The founder, Virginia, played by Sigourney Weaver at her no-nonsense best, recognizes something in Joy and pushes her to get involved. As interesting as the group and its dynamics are, particularly around the issue of access to abortion for poor and Black women, Call Jane is about ordinary wife and mother Joy’s own consciousness raising. She feels empowered as she begins assisting women as they’re undergoing abortions and soon learns to do the procedure herself, eventually teaching the other Janes so the collective can offer abortions much more affordably.

As an accessible film with a solid lead performance, Call Jane is an important addition to the Janes’ story and a reminder of the power of collective action. It’s hard not to feel sorrow and anger when, at the end, the Janes celebrate Roe v. Wade and the dissolution of the group. But it’s also a call to action.