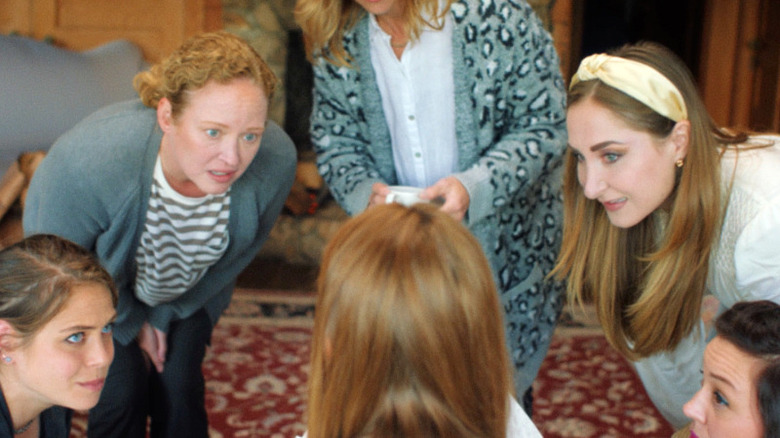 Having a film run in real-time is already bold. In Soft & Quiet, that is the tip of the iceberg. Essentially, a group of Karens sharing their super-racist views embrace each other at their first official group meeting. When they decide to move the gathering to a more comfortable location, the women stop at a local store for refreshments, leading to an altercation between their group and two “other” women. Dissatisfied with the outcome of the verbal assault, the group takes the violence directly to their victim’s home. Soft & Quiet is infuriating and brilliant.

The dialogue takes every offensive, cliché, and horrifying thing spewed over the internet, heard on cell phone footage, and in national rallies, especially since Obama was running for office. Government suspicion, recruiting, homeschooling, The Constitution, traditional family, you name the subject, and it appears in this script. It is like reading through the comments section on Facebook or 8chan. Soft & Quiet is terrifying because of its relevance.

Handheld camerawork immerses the viewer inside the film, moving from speaker to speaker and with the action. The amount of rehearsal this must have required is mind-boggling. The subtle digs are clever. Leslie dons a jacket reading Lieben Zu Hassen. In case you don’t speak German, the phrase translates into English as “Love To Hate.”

I have to hand it to this cast. To say vitriolic things and act in such a vile manner, you have to trust your director and your fellow cast members. The physicality and choreography of scenes are a thing of hideous beauty. It is the utter racist nonchalance that kills you. The hidden humor of these women traveling in a minivan is unmissable.

As you awkwardly cringe at the horror of it all, your level of anticipation simmers wildly. It is so uncomfortable your palms will sweat. The film is sliced right down the middle. The first half respects the title, and the second half goes off the rails. As the terror increases, your heart will be in your throat. Soft & Quiet is a powder keg. It is pure rage-fueled, technically coordinated chaos. This film deserves a hard and loud standing ovation for writer-director Beth de Araújo. It is a thrilling masterpiece.