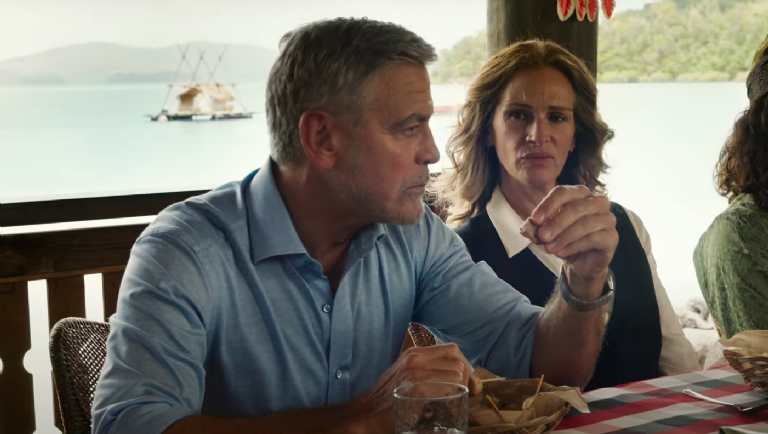 At one point in Ticket to Paradise, George Clooney and Julia Roberts hit an outdoor dance floor. He bobs his head up and around like an owl startled from a burrow. Both do the running man, wiggle their arms in a wave, and jump around to early 1990s hip-hop while Roberts uncorks that distinctive laugh.

Such goofy shenanigans are few in Ticket to Paradise, a film I can’t rave about yet is tough to dislike. It’s pleasant enough if you’re satisfied watching two well-loved stars coast on their charisma in a gorgeous tropical setting.

Clooney (Catch-22) and Roberts (Gaslit) play David and Georgia, divorcees whose five-year marriage didn’t end soon enough. Their daughter, Lily (Kaitlyn Dever), is the one bright spot from their union and the only topic two agree upon all these years later.

In no time, David and Georgia jet off to Bali, burying the hatchet while they figure out how to bust up the impending wedding. We all know where this is headed. Complicating matters mildly is Georgia’s boyfriend, Paul (Lucas Bravo, Mrs. Harris Goes to Paris), a dreamy French pilot who pops over to Bali to surprise her with breakfast, among other things.

David and Georgia’s plan isn’t elaborate, and their barbed repartee isn’t exactly like that of the classic His Girl Friday. Here, one says, “You’ve got to be kidding,” and the other glowers when they’re in the same vicinity.

The script by director Ol Parker (Mamma Mia! Here We Go Again) and longtime producer Daniel Pipski (A Teacher) skirts the unpalatable device of having a person of color serve as the means of a white person’s enlightenment, especially where Lily notes how unbalanced she feels and Gede describes the balance between his business and nature. Fortunately, the film also gives Gede believable doubts about whether their whirlwind love will last, an earnest desire for her parents’ blessing, and a large extended family wise to their disapproval.

The story also dabbles in economics, with Gede telling David how he sells seaweed to Whole Foods, assuring him and the audience of steady income. While Ticket to Paradise doesn’t mention the privilege in tossing aside a costly education, it’s also hard to ignore who has the time and wherewithal to head halfway around the world at a moment’s notice.

All that said, Clooney, Roberts, and the rest of the cast create some genuine emotion. David opens up about how his marriage faltered, with Clooney delivering an understated yet heartfelt confession. Roberts shows Georgia being adamant about Lily not making her mistakes to rethinking her misgivings amid her daughter’s happiness. Deaver, endearingly feisty in Hulu’s Rosaline, has less to do here, cringing about her parents’ dance floor antics and being tearful or determined otherwise. Aside from Clooney and Roberts, Lourd gets most of the laughs as Lily’s confident second banana, scooping up the sweethearts’ drinks when they’re lost in each other and having a handy supply of condoms.

The scenery, including much shot in Australia, is indeed stunning, with cinematographer Ole Bratt Birkeland (Judy) showcasing lush beaches and sunsets as vibrant as the colorful fabrics and foods in the marketplace. With as much depth as its crystal-clear waters, Ticket to Paradise is underwhelming, but viewers craving a light getaway may find it worth the trip.