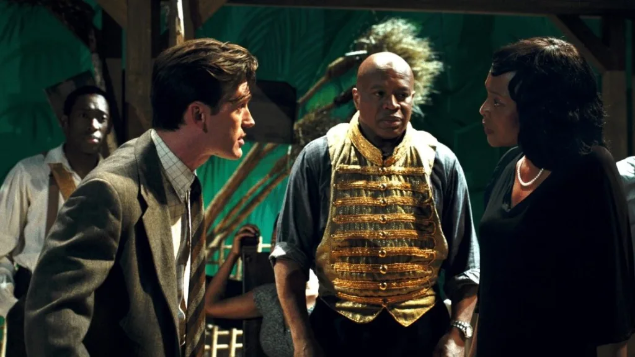 In Depression-era America, co-administrators of the Negro Theatre Unit, Rose McClendon and Houseman will face their own challenges: health for actress McClendon and the federal funding channeled from the U.S. Works Project Administration for Houseman. In addition, in the course of the play’s production, additional multiple crises arise, both political and personal. Welles resists the director’s job, and after accepting because of his wife’s idea for the Haitian setting, has difficulty hiring professional actors. Rose faces what becomes a life-threatening medical condition and disputes arise from an ex-boxer with alcohol troubles, a compulsion shared by Welles. The sleezy Senator Martin Dies threatens to cancel funds for this Federal Theatre Project. Other problems include homophobia, stage fright paralyzing cast members, Welles in blackface, marriage quarrels (Welles unsupportive of wife Virginia’s budding film career), and shifting witchcraft to voodoo, including appropriate music and sound. In fact, Welles’ adaptation involved Haitian music and magical realism against the backdrop of the court of King Henri Christophe, leader in the Haitian Revolution.

Bash Achkar’s cinematography and Emma Bradford’s art direction provide effective compositions and art design respectively. Jewell Wilson Bridges captures Welles’ egotism, as the Black cast deserves the real credit for salvaging the production. Daniel Kuhlman is an appealingly understated Houseman, while Inger Tudor as Rose McClendon, a Harlem Renaissance luminary, shines as the initially cast Lady Macbeth with her composed performance. Wrekless Watson as the alcoholic, ex-boxer Cuba Johnson, the show’s Macduff, is an outstanding, unpredictable outlier. Other supporting players perform perhaps too faithfully in character, that is, they are defined as unprofessional actors. However, in several private scenes, they establish a truly authentic, engaging presence.

On the whole, however, Voodoo Macbeth lacks cinematic, stirring drama, often feeling staged, reenacting too faithfully the theatrical production’s travails. Rather than resisting, it embraces its context. Admirably, however, the idea behind this film’s production is almost as daring as the original Voodoo Macbeth adaptation, that is, here a group of ten directors and eight writers, representing remarkable ethnic diversity, collaborated. Commendably and surprisingly given the many contributors, cinematic coherence pervades the film. Perhaps there is no curse for the Scottish play!

To be sure, the history involving Welles and Houseman offers an irresistibly adventurous endeavor, long before audiences embraced such unorthodox casting and atypical representation, as depicted herein by protesters reacting to the production. Moreover, even after his legendary 1938 War of the Worlds radio broadcast, his 1941 Citizen Kane, his many notable films and lauded career, Welles himself, in a 1982 interview, is quoted saying, “By all odds, my great success in my life was that play, because opening night there were five blocks in which all traffic was stopped. You couldn’t get near the theatre in Harlem. Everybody who was anybody in the black or white world was there. And when the play ended there were so many curtain calls that finally they left the curtain open, and the audience came up on the stage to congratulate the actors. And that was magical.” The production played at the Lafayette Theatre for ten weeks and then toured four thousand miles across America. Credit this USC student team, then, for choosing to wrestle with this momentous, fraught enterprise.