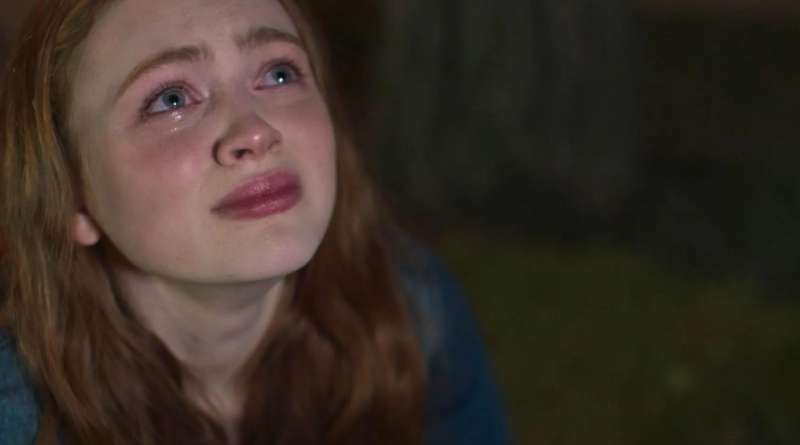 It would be easy to dismiss director Gren Wells’ Dear Zoe as a simple coming-of-age drama, but beyond the teen angst is a deeper story about life after tragedy. Anchored by a compelling performance by Sadie Sink, this is a story about how one navigates a life that is now divided into “before” and “after”.

Sixteen-year-old Tess (Sink) is an average suburban teenager living a relatively comfortable life with her mother and stepfather and two younger half-sisters, Emily and Zoe. On September 11, 2001, as the world watches catastrophe unfold in New York, a smaller family disaster is unfolding that will forever change Tess’ life. Caught off guard by the events of 9/11 on TV, Tess turns her back on her littlest sister, Zoe (Mckenzie Noel Rusiewicz) for only a brief moment, but it is long enough for the young child to be involved in a horrific accident.

Zoe’s death devastates Tess’ picture-perfect family as each one of them deals with their grief in unique and deeply personal ways. Acknowledging that nothing will ever be the same and owning her own part in the tragedy, Zoe flees her mother Elly (Jessica Capshaw), stepdad (Justin Bartha) and sister Emily (Vivien Lyra Blair) and life in the suburbs for her biological father, Nick (Theo Rossi).

Nick is a down-on-his-luck working man in a lower class neighbourhood who struggles to make ends meet but welcomes his daughter into his home with a warm heart and open arms. Away from the cloud of grief that hangs over her mother and stepdad, Tess has found some freedom to deal with her emotions in the wake of Zoe’s death. With the help of a new love interest, Jimmy (Kweku Collins), Tess’ healing journey begins in earnest as she begins to move forward in her life after Zoe.

Based on Philip Beard’s young adult novel, most of Dear Zoe is accompanied by Sink’s voiceover narration giving words to her grieving process and feelings of guilt. Adapted for the screen by Melissa Martin and Marc Lhormer, the dialogue avoids sugar-coating any of the aftermath of Tess’ post-accident life as she dictates what is essentially a love letter to her deceased sibling. Facing themes of suicide and depression head-on, the script avoids becoming too heavy-handed. By avoiding some more overtly melodramatic clichés, Dear Zoe stops itself from becoming something more akin to a Nicholas Sparks story.

Sink does the heavy-lifting across the film as Tess slowly finds a way through her grief while dealing with normal teenage problems. Already having a banner year with the final season of Stranger Things and a dramatic turn opposite Brendan Fraser in The Whale, Sink is given more of a complex role here and a true chance to flex her acting skills. The 20-year-old comes alive on screen opposite Collins and their chemistry is undeniable, making these star-crossed teen lovebirds believable.

With her direction, Wells sets up good contrasts between Tess’ “before” and “after” Zoe life. Capshaw and Bartha don’t much to do other than sleepwalk through their grief as warranted, but this story isn’t theirs, and therefore, taking a backseat to Tess seems appropriate. When Capshaw’s Elly and Tess’ stories converge close to the film’s climax, it might feel a little too on-the-nose and predictable, but ultimately, Wells steers the story away from overt sentimentality.

Ultimately, Dear Zoe is a decent take on individual healing and the grieving process that’s bolstered by a well-rounded performance by Sink. It’s clear that Sink is on the fast-track to becoming the true breakout star of Stranger Things and with her range on display in Dear Zoe, viewers can expect to see her take on more complex characters and weighty roles in her future.