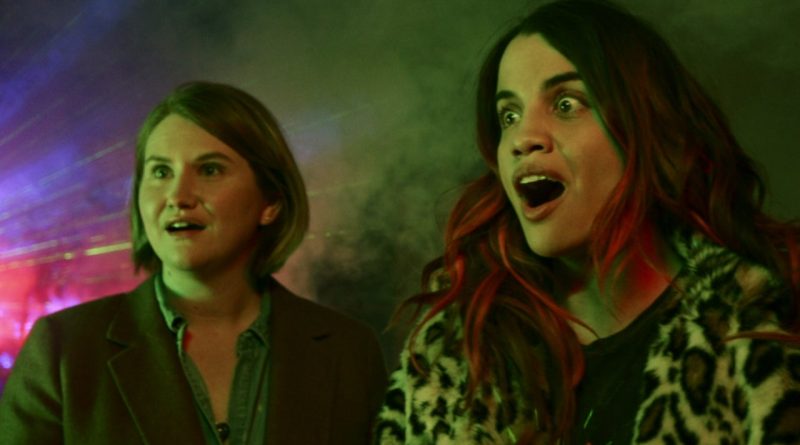 Is it okay to review Natalie Morales’ face? The Parks and Recreation alum plays an extraterrestrial in the gentle comedy I’m Totally Fine, and some of the movie’s best laughs involve her discomfort with the human visage. Whether she’s attempting to smile like an earthling or questioning the value of eyebrows, Morales engages in a fearless facial slapstick that is very funny and weirdly endearing.

I’m Totally Fine stars Jillian Bell as Vanessa, a grieving woman who has just lost her dearest friend, Jennifer. The two women were best friends since childhood and business partners as adults, and on the cusp of success with their soda company, Jennifer has died suddenly.

The two women had rented a house in the country so they could celebrate their business coup with a big party. The set-up is that Vanessa decides to drive out to the house anyway, despite Jennifer’s death.

She thinks it will do her good to get away and clear her head.

By the light of a full moon, Vanessa cries for her loss and drinks too much and falls asleep outside by the swimming pool.

When she wakes up in the morning, her friend Jennifer (Morales) is at the rented house.

But she’s dead!! How is that possible?!!

“I am an extra-terrestrial who has taken her form,” the Jennifer look-alike says. “She continues to be deceased.” Glad that’s cleared up.

Vanessa initially assumes she’s hallucinating or losing her mind. Gradually, she and her new alien friend relax in one another’s company and each gets to know how the other operates.

The alien has a happy dalliance with human emotion and experiences some of the earth’s beauties, such as a vivid sunset; Vanessa discovers her own strength and learns that her friend Jennifer will live on in love and memory whether she is physically present or not.

I’m Totally Fine is written by Alisha Ketry and directed by Brandon Dermer and is an understated look at friendship, loss and grief.

Bell and Morales are gifted comics both, and deft at playing daft; watching their friendship take shape is a celebration of everyday life that quietly overtakes the pall death might have cast on the proceedings.

Sweet, charming, funny film, this — definitely one to see with your bestie.