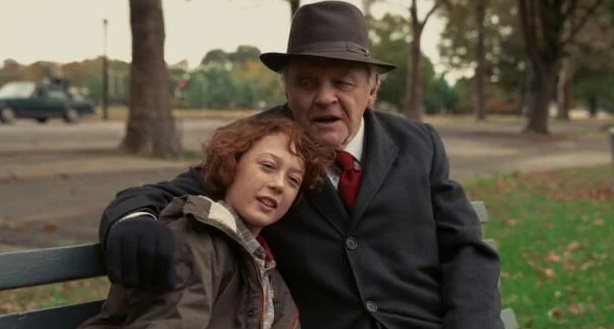 In Turkeltaub’s classroom, in subsequent family dinners, in school hallways, and elsewhere, director Gray exhibits a remarkable ability to define character through casual dialogue in convincing exchanges, those that are humorous and contentious. Class privilege, racist treatment, and anti-Semitism intermingle in Paul’s right and wrong choices, his behavior as believable as it is disruptive for Paul’s parents and teachers. In other words, he’s a real sixth grade boy in Reagan’s America with the Cold War looming. In a television clip, President Reagan says, “Do you ever feel that we might be the generation that sees Armageddon?” hence the title, Armageddon Time.

Anthony Hopkins is the Jewish immigrant grandfather, Aaron Rabinowitz, whose family escaped persecution in the Ukraine after his relatives’ murders. They fled the Nazis first to Liverpool and then on to the Land of Dreams, as Grandpa calls it. Hopkins proves yet again what an acting treasure he is, delivering solid, commendable values through encouragement of Paul and sharing his traumas. As Paul, Banks Repeta gives a beautifully nuanced performance. Recently, child actors have shown amazing talent beyond their years. As Paul’s parents, Anne Hathaway and Jeremy Strong present caring but conflicted parents, trying to make good decisions for Paul but clashing with him.

In this year’s Telluride Film Festival interview, writer/director Gray describes the thoroughly autobiographical elements in the film. Hopkins/Grandpa wears Gray’s grandfather’s hat and looks uncannily like him. Jeremy Strong as Paul’s father “is exactly who my father was” and they “used the same furniture” while shooting in a house down the block from Gray’s New Jersey home. None of this would matter had the story not come alive, but it does with vivid authenticity and heart.