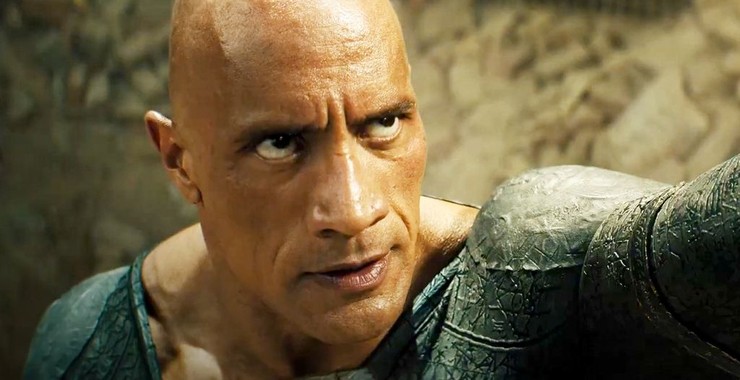 Years ago, when I taught screenwriting, I told students: “Show me a story,” adding that good stories need solid characters. Both are lacking in Jaume Collet-Serra’s cacophonous live-action DC cartoon.

The prologue introduces the ancient Middle Eastern kingdom of Kahndaq, where the ruler Sabaac forces his slaves to mine for the magical metal Eternium. When a huge gemstone is found, a young boy encourages others to revolt but – after he’s captured and about to be executed – powerful wizards intervene, transforming him into the titular champion (Dwayne Johnson) who topples the entire realm.

5000 years later in Kahndaq, as archeologist Adrianna Tomaz (Sarah Shahi) searches for the king’s legendary Eternium crown, she unwittingly unearths the mythological spandex-clad anti-hero, Teth Adam – with a pentagram scar on his chest and a backstory with his son Hurut. That’s where Rory Haines, Sohrab Noshirvani and Adam Sztykiel’s ‘origin’ script stops being coherent.

“In this world, there are heroes and there are villains. Heroes don’t kill people,” golden-winged Hawkman tells Adam. “Well, I do,” Adam retorts, adding “Force is always necessary.”

FYI: When Black Adam says “Shazam!” it’s not the familiar “Shazam!” uttered by Captain Marvel, although it also serves as an acronym to activate their superpowers – but that’s never explained.

And – if you’ve remained stoic through the perfunctory two hours+ – stay for the ‘revealing’ credits, featuring a cameo by a much beloved DC hero, setting up a future franchise confrontation.

On the Granger Gauge of 1 to 10, Black Adam is a sloppy, senseless 6 – playing in theaters.