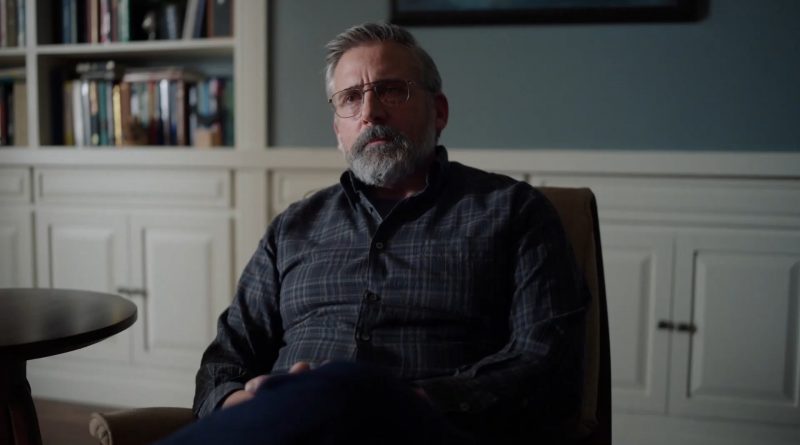 At the start of this claustrophobic, bizarrely unpredictable series, recently widowed psychotherapist Alan Strauss (Steve Carell) is kidnapped by Sam Fortner (Domhnall Gleeson), a victim of traumatic childhood-abuse who has become a serial killer. Alan is kept prisoner in the dingy basement of an isolated house in the woods.

“You have to fix me,” psychotic Sam insists, as therapist and patient try to curb Sam’s homicidal compulsion.

Chained to the floor, Alan lies on a bed with a plastic urinal and bedpan nearby, along with Dunkin Donuts coffee and repeated interludes of Kenny Chesney music. Sam tells Alan about No Shoes Nation, Chesney’s community of fans, and reveals that he’s been to 27 of the musician’s concerts.

Each night, Sam supplies ethnic take-out meals that he buys while driving home from work as a restaurant health inspector.

The lengthy ordeal allows Alan to reflect on his secular Jewish faith and regret his estrangement from his son, Ezra (Andrew Leeds), who converted to Orthodox Judaism, which Alan and his late wife Beth (Laura Neimi) considered rigid and restrictive, particularly when Ezra had children of his own. Beth, who died of cancer, was a cantor in a Reform synagogue,

Emanating from Joel Fields and Joe Weisberg, the same production/writing team that created FX’s Russian-spy drama The Americans, there are many, often revealing flashbacks, plus David Alan Grier as Dr. Charlie Addison, Alan’s long-deceased therapist – with whom Alan has imaginary conversations – and Linda Emond as Candace Fortner, Sam’s mother who – while she fears for Sam – is also afraid of him.

What distinguishes this dark, grim psychological thriller about forgiveness and atonement is the consummately subdued acting displayed by Steve Carell (The Office) and Domhnall Gleeson (Ex Machina). And throughout the series, I kept thinking it would make an effective stage play.

On the Granger Gauge of 1 to 10, The Patient is an intense, suspense-spiraling, often surprising 6 – all 10 episodes running only 20-25 minutes in length except the finale – and all are now streaming on Hulu.