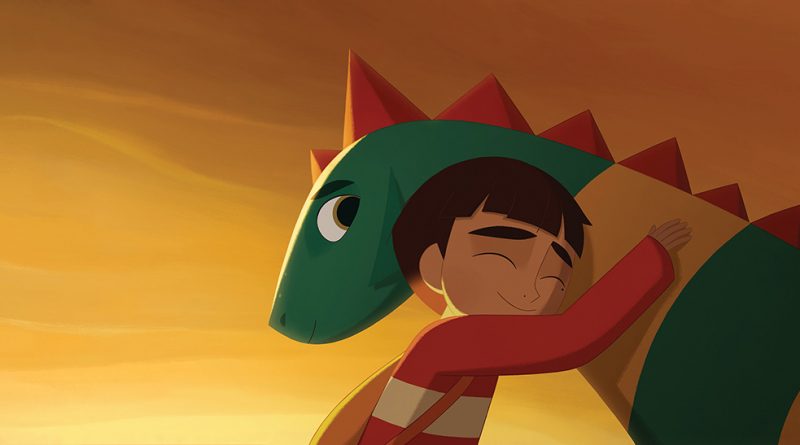 Lovingly hand-drawn from a child’s perspective, the animated film My Father’s Dragon hits the sweet spot, offering young viewers a whimsical adventure amid a coming-of-age tale. It’s gentle and charming, with characters who behave in unexpected ways.

Based on the 1948 children’s book by Ruth Stiles Gannett, which earned a Newbury Honor, My Father’s Dragon is the latest film from the Academy Award-nominated studio Cartoon Saloon (The Secret of Kells and Wolfwalkers). Airing on Netflix, it assembles an impressive creative team, from director Nora Twomey (The Breadwinner) and screenwriter Meg LeFauve (Inside Out) to the voice cast, including Rita Moreno (West Side Story), Jacob Tremblay (Luca), and Gaten Matarazzo (Stranger Things).

Ten-year-old Elmer (Tremblay) is an eager helper at his mother’s general store, rustling up strawberry lollipops for the dentist and other things while customers tousle his hair. He always was good at finding things, narrates his adult daughter (Mary Kay Place, Shameless) while he peeks into cupboards, big brown eyes searching around canisters and such.

Bathed in golden light, the store is a warm haven for Elmer and his mom, Dela (Golshifteh Farahani, TV’s Invasion), until it forecloses. The two relocate to Nevergreen City, a rainy metropolis of blue-gray skyscrapers, leaky pipes, and a cranky landlady (Moreno). Dela reassures him they’ll open a new store with the golden coins she’s saved from their old cash register. Don’t worry, she adds. “That’s my job.”

Yet Dela can stay upbeat for only so long. Searching the want ads, she takes some coins for the pay phone, and the filmmakers show Elmer’s anxiety grow while each one clinks away.

New hope arrives as a cat (Whoopi Goldberg, Till) that Elmer befriends one night. After the boy wonders, “Why is everything so hard?” the animal describes Wild Island, where a dragon is forced to stop the turnip-shaped land from sinking. If Elmer frees it, the cat suggests, perhaps it can help him and his mom start anew.

The dragon that Elmer imagines flying in streaks of gold turns out to be a child himself, at least by dragon years. Boris (an enthusiastic Matarazzo) has blue and gold stripes, tiny gold wings—and little to no backbone. He came to the island like all dragons must, as a rite of passage to become fire-breathing and fierce, but he’s afraid of fire and water. He prefers hugs.

Meanwhile, the island’s creatures are afraid of drowning. The gorilla Saiwa (Ian McShane, American Gods) lashed Boris to the top of the island to keep them afloat by flying—not the best solution, perhaps, but the best that Saiwa can muster. McShane can convey smooth menace, but here, he gives Saiwa the gravitas of a protective leader, noting that panic will be the death of them all.

That’s something that Elmer seems to sense, even as he conspires to set the dragon free. To say much more would spoil his and Boris’s journey, but suffice it to say that in a bag with leftovers from his mom’s store, he finds use for lots of odds and ends.

The island is truly a wild environment, with pink-tinged forests of dandelions, mushroom cap boats, and more. To maintain a childlike viewpoint, Twomey and the other creatives in the production notes said they asked their children to draw the animals, rife with “pokey teeth and pokey claws,” save for Soda (Judy Greer, Archer), a bubbly whale who loves tangerines. The resulting menagerie has small bodies, big heads, and indeed plenty of teeth, especially on the fretting crocodile (Alan Cumming, The Good Fight) scooping his youngsters to safety between his jaws. “I just want it to be safe again,” says one mama rhino (Dianne Wiest, Mayor of Kingstown), as if speaking for everyone.

Fanciful setting aside, My Father’s Dragon sprinkles in magic, although none that instantly makes all troubles disappear. Wanting to help Boris and the other creatures survive, Elmer discovers he sounds a lot like his mother, reassuring them it’ll work out even while he’s figuring out how. Such subtle understanding gives this affectionate film added warmth, much like the soothing golden hues of Elmer’s hopes.