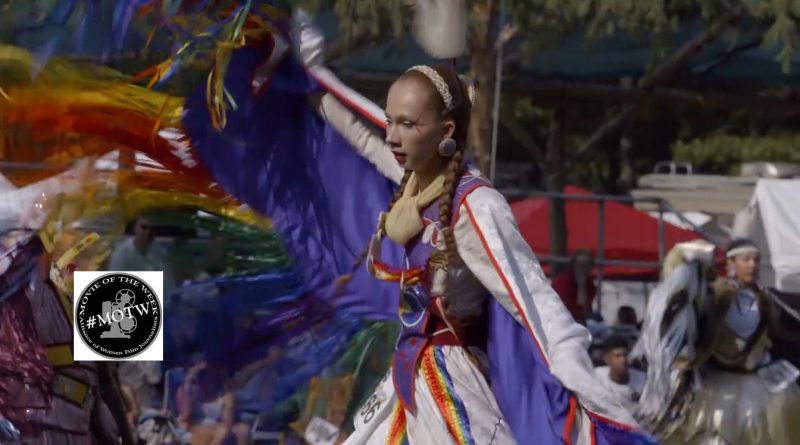 The importance of being loved, just as you are, is at the heart of Stéphanie Lamorré’s quietly observational documentary Being Thunder. As it follows Niantic Narragansett teenager Sherenté Harris — a two-spirit gender-fluid 15-year-old who finds joy in competing in traditional Native American fancy shawl dancing — the film drives home the power of the unconditional acceptance that Sherenté receives from their parents, siblings, and community. Or most of it, anyway. Because even though there’s a long history of two-spirit people in Indigenous folklore and traditions, some tribal leaders believe in traditional binary gender roles and aren’t inclined to support Sherenté, who grew up performing historically male war dances but is now drawn to the shawl competitions. Despite this insensitive treatment, Sherenté is never anything less than true to themselves and their passions, refusing to be defined by others.

Lamorré follows Sherenté as they attend competitions, spend time with family in their home state of Rhode Island (including their parents’ sweet wedding vow renewal), and apply to college, sharing their experiences in poignant essays. The Harris family is both disarmingly ordinary — disheveled house, rowdy kids, boisterous gatherings — and remarkably extraordinary in the absolute support they provide to Sherenté. It’s heartwarming to watch.

Being Thunder is, ultimately, about what it means to be truly, authentically yourself — dressing and behaving in the way you feel comfortable and confident, participating in the activities that make you feel happy, and spending time with the people who help you feel good about who you are. That’s something everyone should aspire to, both for themselves and for the people they love, and Lamorré’s film is a joyful example of what it can look like when we succeed. — Betsy Bozdech

Leslie Combemale Apart from the importance of amplifying indigenous voices and our LGBTQIA brothers, sisters, and Two-Spirits, what is most valuable about Being Thunder is the wise, insightful voice of documentary subject, Sherenté Harris. Documentarian Stephanie Lamorre gained the trust of Sherenté and their family in order to film the challenges and triumphs of the teen activist and Fancy Shawl dancer, but that’s no guarantee audiences would see their passion, authenticity, or an intelligence beyond their years. It speaks to both filmmaker and subject that Being Thunder is so captivating. By film’s end, viewers feel a connection to Sherenté and their journey, and compassion for other Two Spirits without their will and determination. Read Sherente Harris and Stéphanie Lamorré interview

Pam Grady: Stéphanie Lamorré’s engrossing cinema verite documentary focuses on teenage Sherente Harris, a member of Rhode Island’s Narragansett tribe who is a genderqueer, nonbinary “two-spirit.” Irrepressible and self-confident, Sherente is a bright student applying to Ivy League universities and a gifted dancer who competes in the women’s competition at pow wows. At home, they are surrounded by a loving family who embraces them for who they are. The pow wows are another story. Their fellow dancers respect and accept Sherente but judges and other officials are often prejudiced, refusing to judge them fairly. Lamorré’s film makes personal in Sherente’s story the culture war debate about gender and sports, making naked the absurd, hurtful, and dangerous bigotry at its core. Following Sherente from pow wows to family celebrations to simply hanging out at home, Being Thunder presents a moving portrait of a young person who refuses to let others define them and seizes life on their own terms.

Nell Minow: The quiet intimacy of this documentary dissolves the boundaries between audience and subject so that we feel the warmth of the family’s unconditional love and the resolve of its young subject.

Sherin Nicole Being Thunder reaches into the heart of being and of embracing. Colonialism is not only a weapon but a tool of erasure. Since the first tick of time, most cultures celebrated our beings of Two-Spirits, our Hijras, our genderless and our gender-fluid ones. Sherenté of the Narragansett people dances in prayer at powwows and walks the true path. In Being Thunder, despite those who seek to shutter that light, Sherenté never allows it to fall below the horizon.

Marilyn Ferdinand As pushback against transgender rights intensifies, Sherente, a member of the Narragansett tribe of Rhode Island who identifies as two-spirit and queer, fights their own marginalized tribe for the right to dance with women in powwow competitions. The value of director Stéphanie Lamorré’s roughly made documentary is in telling the story of Native Americans on North America’s East Coast, an underrepresented minority among underrepresented minorities, and exploring their beliefs through the experiences of Sherente.

Jennifer Merin Being Thunder is a documentary in which filmmaker Stéphanie Lamorré follows Sherente Harris, a teenage Native American from Rhode Island’s Narragansett tribe who is ‘two-spirted’ and identifies as ‘they.’ Sherente is full spirited when performing traditional dances in the regional competitions staged at New England’s annual tribal pow wows. Wearing traditional female dress, Sherente performs with joy, grace and beauty. While there is no ruling that prohibits two spirit-genderqueer people from competing in dances different from those performed by their birth gender, Sherente often faces discrimination at the meets when tribal leaders manipulate scores or disqualify him outright because they believe in traditional (White) gender roles. With determination, courage and the support of family and fellow dancers, Sherente continues to perform regardless of the insensitive and dishonest behavior from tribal elders and others in his native community. Sherente’s story is compelling and his spirit, dancing and costumes are magnificent.

Loren King You won’t soon forget Sherenté Harris, the self-possessed, thoughtful and poetic two-spirit teen from the Narragansett tribe in Rhode Island. But captured just as memorably, in French filmmaker Stephanie Lamorre’s lyrical, verite style documentary Being Thunder, is Sherenté’s loving and supporting parents and siblings. As Sherenté applies makeup and participates in the brightly costumed traditional dance competitions with other New England tribes, their family and much of the tribe, especially the women elders, offer loving and active support. It’s no wonder this teenager is poised even when faced with disappointment and discrimination. When toward the end of the film Sherenté is greeted with positive news about their future, it’s impossible not to cheer along with the family that lovingly surrounds them.

Sandie Angulo Chen: What a wonderful selection to kick off Native American Heritage Month with as we feature Stéphanie Lamorré’s excellent documentary about Sherente Harris, a genderqueer Indigenous teen who follows in the ancestral tradition of the Two Spirit path and dances the Fancy Shawl dance in powwow competitions. A member of Rhode Island’s Narragansett tribe, Sherente is intelligent, poetic, stylish, and completely supported by their parents — if not always all members of the greater community. The documentary provides historical context for indigenous acceptance of Two Spirit individuals, and centers on the importance of Sherente walking in their truth. Viewers will learn a lot but also simply enjoy getting to know such a charming and clever teen.

Susan Wloszczyna: French filmmaker Stephanie Lamorre’s documentary Being Thunder focuses on a Native American dancer Sherente, a 17-year old member of the Narragansett Tribe in Rhode Island, who is truly two-spirited, displays both female and male traits. His large family is supportive as they join in native dancing competitions while wearing fringe on their costumes that reflect the colors of the LGBTQ+ community. However, the tribal leaders often give them poor scores or simply disqualifies them no matter how well they perform. As for the title of the doc, it refers to how thunder marks the clash of two fronts coming together. Sherente is as good anyone else as they perform pow-wow dancing but they share that two-spirited people are part of the tribe’s ancient traditions. By overcoming both expectations, he has had a positive impact beyond their community. As for his seven member family, they constantly have Sherente’s back as in the scene where they sit in front of a computer and cheer as they learn that they have been accepted at Brown University, their first pick. Their philosophy is to see the spectrum that exists in all creation since unity is the source of strength. Lamorre digs rather deep as she displays a rare look into Native American culture in this day and age.

Cate Marquis Stephanie Lamorre’s warm documentary Being Thunder follows Sherente Harris, a teenage member of the Native American Narragansett tribe in Rhode Island who is “two-spirited,” meaning somewhere between the genders of male and female. Sherente has no interest in hormone therapy or surgery – Sherente just wants to be Sherente. That includes dancing the traditional “fancy shawl” dance usually performed by girls, although Sherente was born male. And Sherente is a good dancer, graceful and skillful. But while family and tribe accept him (the pronoun his loving family uses), not everyone does, as we find out when he competes in the multi-tribe regional powwow as a dancer. The documentary gives us a heart-warming, fly-on-the-wall glimpse inside Sherente’s warm, supportive family and his tribal community, and the family’s devotion to their heritage, language and each other.