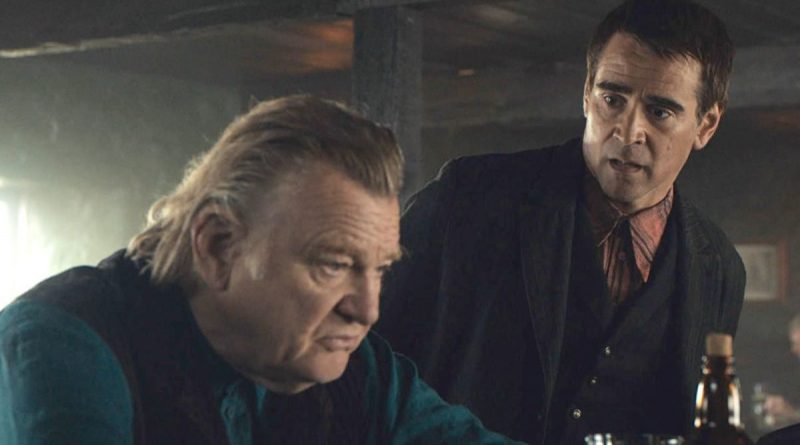 The Banshees of Inisherin presents a dark, humorous, moral fable

As he did in In Bruges and Three Billboards Outside Ebbing, Missouri, in The Banshees of Inisherin writer/director Martin McDonagh engages head on and provocatively with confrontational characters battling anger management issues He again grabs the tiger by the tail, isolating his characters on a fictional island off Ireland’s northern coast in 1923.

Best of friends, Colm Doherty and Padraic Súilleabháin head to the local, and only, pub for their pints and extended conversation every day. But this isn’t an ordinary afternoon, and friction ensues immediately as Colm Doherty avoids, refuses to sit with, and then dismisses cow herder Padraic with a cursory, “I just don’t like you anymore.” Colm wants time to compose and play music, not talk for hours about drivel. Thus begins Padraic’s inability to comprehend, much less accept, this change in his life, harassing Colm for the foreseeable future.

This disruption affects everyone in the small community: Padraic’s sister Siobhan, with whom he lives and who yearns for escape; the pub owner Jonjo; the local, hostile policeman Peadar; his son Dominic, the most mentally challenged young man; an unsupportive priest; and an unnerving soothsayer, Mrs. McCormick, dressed in black, smoking a pipe, wandering the roads. This heavenly, eccentric assortment of characters blends laugh-out-loud comments and behavior with serious undertones regarding the lengths to which a scorned Padraic will protest, and the dreadful self-mutilation Colm will undertake.

Padraic cannot accept the rejection, Colm will not yield. Looking on in wonder are Padraic’s lovely miniature donkey Jenny, whom he brings into his and his sister’s small home, and Colm’s sweet collie. The microcosm of this isolated community mirrors the Irish Civil War’s cannons and gunfire heard, smoke spotted, across the sea, a momentous backdrop.

The story triumphs through the performances of Colin Farrell as Pádraic, Brendan Gleeson as Colm, and Kerry Condon as Siobhán. Composed, often stock-still, Colm contrasts with the volatile Pádraic, the camera often moving with him. Farrell’s perplexed reaction shots make his face a landscape as evocative as the gorgeous Irish coast of County Galway and County Mayo where this was shot, a gorgeous backdrop against which it unfolds. Writer McDonagh’s ear for pitch perfect dialogue (there’s a lot to quote here) kept me thoroughly amused through even some dark humorous patches. The Banshees of Inisherin is a moral fable with heart and a message.