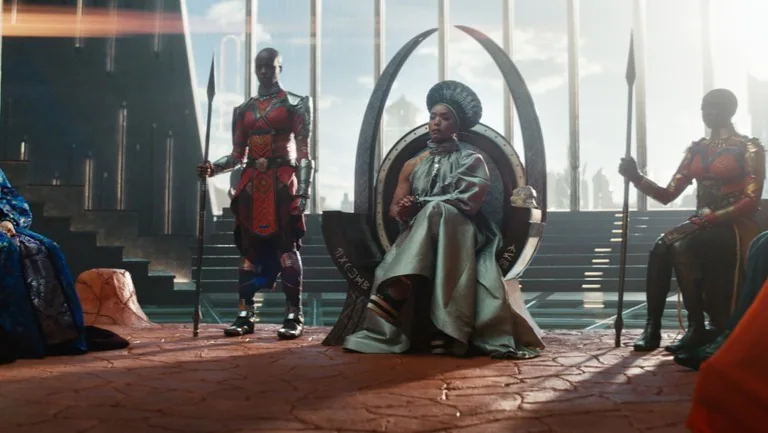 Black Panther: Wakanda Forever – You can come to Wakanda conscious or unconscious.

When the actor playing the title character in your enormously successful superhero movie passes away unexpectedly, what do you do about the already announced sequel? The producers of Marvel Comics Black Panther had to decide to recast the role or let T’Challa die along with his creator, Chadwick Boseman. They chose the latter.
Wakanda Forever begins with King T’Challa’s funeral and continues with his mother and sister trying to protect the hidden realm from being taken over by competing world powers. Wakanda is the source of the highly coveted metal, vibranium. The CIA is involved in its mining for use in weapons of mass destruction.

Meanwhile an underwater Atlantis type city named Talokan needs the vibranium to survive. Both factions try to convince Wakanda to help them with their cause. But that convincing can be deadly.

Wakanda Forever has the least action of any superhero film in the MCU. And when there is action, the fighting is flat. It’s just not exciting and that’s really why most movie watchers go to Superhero pictures. Wakanda does have a strong message about family and tradition and a fierce Angela Bassett. She’s “spear-tacular”, above and below sea level, while swimming was an unfathomable task for a few other actors.

This Black Panther installment is full of ultimatums and threats. It grieves, reminisces and passes the torch. It emphasizes confident women in STEM. It’s a little bit Avatar, Ironman, Star Wars, Fast and Furious and Indiana Jones.
It’s also almost 3 hours long. Forever is in Wakanda’s title because it’s 2 hours and 41 minutes. “ A 3 hour movie?! That’s not enough time.” Said no one ever. My husband, Ricky came in conscious and mostly stayed that way. He gives it 1 1/2 eyes open and a lot of watch looking. I give Black Panther: Wakanda Forever a 6.5

There’s a silent montage of Chadwick Boseman as Black Panther at the opening credits. There’s a scene after the initial ending credits, but nothing at the very end except a reassurance the our hero (heroine?) will be back.