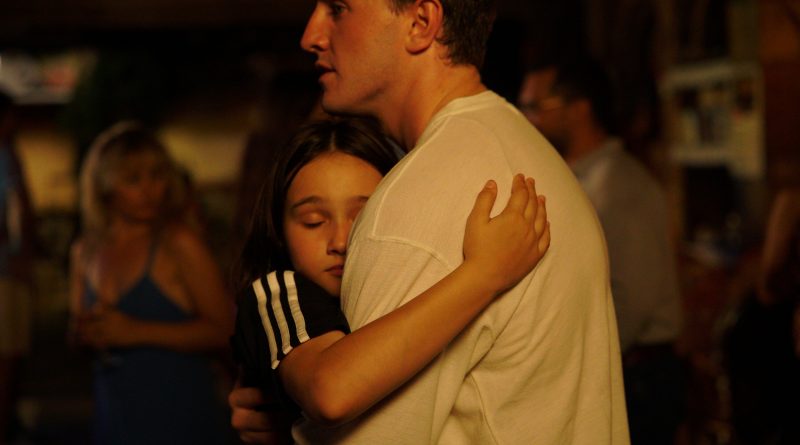 When do you see your parents as relatable people? When you’re a parent yourself, or just mature enough to take in their troubles and insecurities? Aftersun, the powerful feature debut from writer-director Charlotte Wells, stirs these thoughts in a way that’s tender, honest, and subtly devastating. It’s a heartfelt, affecting portrait of a father-daughter relationship that lingers in the mind afterward.

On its face, Aftersun takes us on vacation one summer in Turkey with a young Scottish girl and her dad. The trip coincides with their birthdays. She’s eleven, and he’s a hundred thirty, she teases, chattering while holding a handheld video camera, shooting him while he exaggerates his dance moves. Then at some point, the perspective shifts, the girl is grown, and she views the trip and her dad with new eyes.

Calum (Paul Mescal, The Lost Daughter) and Sophie (newcomer Frankie Corio) have an affectionate bond. He and her mother still say, “Love you” over the phone because they’re family. Sophie is at that age where he still calls her “poppet,” and she leans in for hugs with her whole body, melting into his shoulder and his chest. Yet she’s also on the cusp of puberty, curious about boys and embarrassed that Calum does tai chi poses in public. She’ll turn irritable in a flash, telling him to stop offering to pay for things when she knows he doesn’t have the money.

Calum isn’t destitute, although their hotel looks more tired than the adjacent resort with all-access wristbands. Yet he’s struggling. Between swimming and dining, silly jokes and desserts, he tells Sophie he’s starting a new business venture. He springs for a blue and red handcrafted rug, fascinated that there’s a story behind each one.

Those deeper, larger stories give Aftersun its resonance. So much of life occurs outside of our vantage points, and Aftersun reminds us of that by shifting viewpoints and framing throughout the film. Wells, cinematographer Gregory Oke (Raf), and editor Blair McClendon (The Assistant) move from Sophie on video to her and Calum in the moment to Calum’s view to something else altogether—close-ups, medium shots, and wide shots that go beyond the father and daughter’s experience. Here’s Sophie in the foreground playing video games while her father, centered in the background, talks at the bar, fetching drinks with his back to her and the camera. While she sleeps, the only sound her steady breathing, the camera peers over her to focus on Calum on the hotel balcony, smoking, stretching, and gazing out into the dark. When Sophie presses him about his eleventh birthday, where he thought he’d be at that age, we hear his recollection while watching him reflected in the hotel room’s dark TV screen, his tai chi materials alongside it, hinting at the peace he seeks.

The performers have a gentle, believable rapport whether giggling over inside jokes to sharing more touching moments. Corio shows Sophie’s precociousness, eavesdropping on older girls’ sex talk in the restroom, then feeling out of her league around the teens making out at the pool. Mercurial, she’s sulky, apologetic, then lighting up with trains of thought, such as how she and her dad share the same sky, so they’re never truly apart.

Mescal shows Calum basking in her youth and sweetness, his face flickering with melancholy when she tries to describe feeling drained after an awesome day, a feeling he knows well. He can’t believe he’s made it to his thirties, and at times his gaze and his posture ache like he feels every minute. Meanwhile, he acts like he’s checking off a list of things Sophie must know, such as teaching her how to protect herself or assuring her she can live wherever she wants, be whatever she wants. She has time.

By the time adult Sophie (Celia Rowlson-Hall) looks back on it all, Aftersun muses about how much time we all have with wistfulness, forgiveness, and understanding. The once-awkward way her dad grooved to David Bowie becomes treasured when all she wants is one more dance.