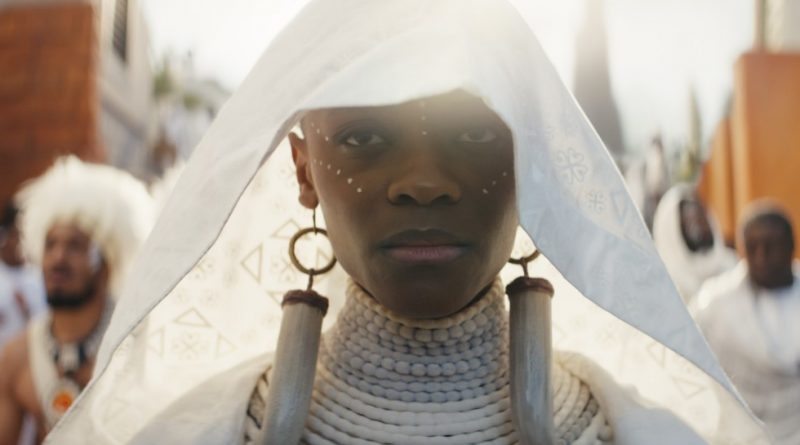 Love for the late Chadwick Boseman pulses through Black Panther: Wakanda Forever, the much-anticipated follow-up to its wildly successful and Oscar-winning predecessor about a technologically advanced African nation and its fierce yet noble protector.

If that seems more introspective than a superhero clash, let alone one with battles on air, sea, and soil, it also feels right. Boseman’s death in 2020 at 43 from colon cancer, an illness he hid save for his inner circle, rocked the close-knit cast and crew, plus legions of fans. Some were too young to have seen his portrayals of pioneers such as Thurgood Marshall (2017’s Marshall) and Jackie Robinson (2013’s 42), but here, just as they got to know—and wanted to emulate—this charismatic king, he was gone. Not just disintegrated into dust, like half the Marvel universe in Avengers: Infinity War, then brought back a year later in Avengers: Endgame. But for real.

Wakanda Forever, then, had a tall order to fill, and if it’s flawed in parts, it also acknowledges this loss and moves forward in a way that’s ultimately satisfying. The plot is sometimes messy, with many moving parts, but the film gives its actors—especially Wakanda’s formidable women—powerful performances and moments to shine.

Where Black Panther in 2018 was about Boseman’s King T’Challa discovering the kind of ruler and hero he wanted to be, Wakanda Forever overall is about how his loved ones and his nation go on without him with new threats at the door. The world doesn’t stop turning through grief, after all.

Wakanda Forever plants us in that rocky mindset from its opening moments as Shuri (Letitia Wright), T’Challa’s science-genius younger sister, scrambles around her lab. Her brother is ill, but instead of going to his side, she’s convinced she can make a cure. Sadly, she can’t crack the code in time.

T’Challa dies offscreen, triggering a heartfelt performance from Wright (The Silent Twins) of pain, rage, doubt, and loneliness. It’s cold comfort being the smartest person in the room, perhaps even on the planet, when you can’t save the ones you love.

Returning Black Panther director Ryan Coogler, who co-wrote the screenplay with returning writer Joe Robert Cole, caps off the first act with T’Challa’s funeral, a moving feast of ritual, dance, music, and light. As the Black Panther’s coffin rises up to a Wakandan airship, Coogler’s wide shot of the nation watching, clad in white, flips the character’s stealthy entrance in the original film when he dropped into action at night.

A year later, Shuri and T’Challa’s mother, Ramonda (Angela Bassett, 9-1-1), sits on the throne while Shuri throws herself into work. T’Challa had wanted to share Wakanda’s scientific resources with the world, but the nation still holds tight to its vibranium, an impervious metal. The Dora Milaje, Wakanda’s all-female fighting force, makes short work of mercenaries who try to steal it while the US government drills for other sources of this rare material.

Here’s where the plotting gets murky. Workers discover a vein of vibranium under the sea, spurring retaliation from the Talokans, a secret underwater society led by Namor (Tenoch Huerta, The Forever Purge). The Talokans, blue-skinned and wearing masks that breathe water, slay the workers, both by force and with an eerie siren’s song that lures them to jump to their deaths.

Namor soon infiltrates Wakanda, where he proposes an alliance against the surface world and demands help in killing the scientist who built the vibranium detection machine. When the Wakandans learn the scientist is a 19-year-old college student, Riri Williams (Dominique Thorne, Judas and the Black Messiah), they decide to protect her instead.

Wakanda Forever at times feels overstuffed with too many characters, some of whom exist to tee up other Marvel Studios projects in the pipeline. For instance, as energetic as Thorne is—and it’s fun to see her bounce ideas off Shuri—comics fans know Williams as Ironheart, a teen with her own Iron Man-like armor whose Disney+ series is on the way. Other scenes at the CIA plod along to lay track for other stories, save for a few brief moments with Martin Freeman (Angelyne) as agent Everett Ross, a Wakandan ally whom Shuri calls her “favorite colonizer.” It makes for a busy second act.

Nevertheless, Coogler and Cole give Namor a compelling backstory—here, he’s a descendant of the Mayans—and Black Panther’s Oscar-winning team of costume designer Ruth E. Carter, production designer Hannah Beachler, and composer Ludwig Göransson, again excel at lush world-building, drawing on indigenous influences to produce a society that, like Wakanda, feels every bit real. Huerta gives Namor convincing gravatas and menace, no easy feat considering the character straddles the sea and the surface with wings on his ankles. When he points out to one Wakandan how surface people have enslaved and mistreated others like them for years, he’s not wrong, and some may wonder why these two civilizations can’t reach a compromise.

All that said, Wakanda Forever rewards viewers with rich turns from other returning characters, who have a chemistry and a bond that’s like family. Bassett is by turns a steely ruler and worried mother, her aching heart laid bare. Dora Milaje leader Okoye (Danai Gurira, The Walking Dead) shows off impressive fight choreography, flashes of humor, unfailing loyalty, and anguish. Lupita Nyong’o (The 355), as Nakia, an ex-spy and T’Challa’s love, and Winston Duke (Nine Days), as Wakanda’s mountain ruler M’Baku, provide counsel, strong action backup, and moments of grace.

It’s no spoiler to say another Black Panther lives in Wakanda Forever—the trailers make that clear—but the film is most stirring when it lets the story and characters breathe. At one moment, when Coogler holds Wright in a closeup as Shuri’s memories and tears flow, it’s a beautiful elegy for T’Challa—and the real-life man behind the mask. Ultimately, Wakanda Forever delivers an emotional sendoff fit for a king—and a message that Wakanda, cherished by its creators onscreen and off, will carry on.