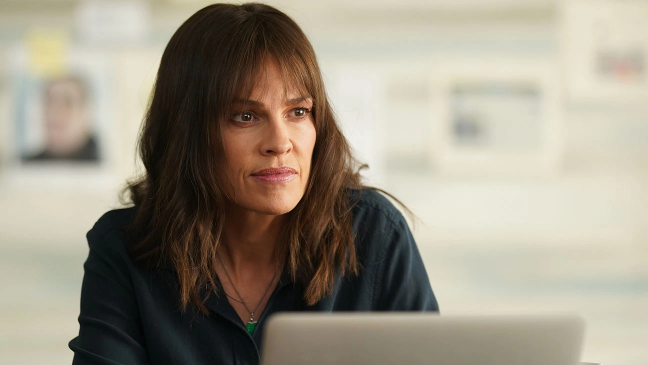 I have never felt any empathy with two-time Oscar winning actress Hilary Swank. I’ve always found her to be humorless, abrasive, even pugnacious – both on-screen and in person.

So casting her as humorless, abrasive, pugnacious journalist Eileen Fitzgerald on Hulu and ABC-TV’s drama “Alaska Daily” really works. Yet – despite encouraging initial ratings – the series is taking a long hiatus which may dissipate whatever tension and interest it initially provoked.

Based in Manhattan, Eileen is a nationally renowned investigative reporter for ‘The Vanguard.’ When her high-profile ‘scoop’ that condemns the U.S. Secretary of Defense backfires because of an unreliable source, she’s summarily fired.

Unemployed, she begins writing a book, accusing her colleagues of being ‘woke wussies.’ But then her former boss from years ago, Stanley Cornik (Jeff Perry), offers her a job with ‘Alaska Daily,’ a struggling newspaper situated on a modest strip mall in Anchorage.

At first she refuses, but then he tempts her with a story about missing and murdered Indigenous women. Her arrogance still intact, along with a martyr complex, Eileen arrives only to be chagrined when Cornik astutely pairs her with Alaskan Native Roz Friendly (Grace Dove). Predictably imperious Eileen is condescending until she realizes how much Roz can teach her about her new environment.

A crisis occurs when a white woman passenger on a cruise ship falls overboard while filming a video. As national attention mounts, the Governor launches a huge search – while, at the same time, a Yupik woman has disappeared. Eileen and Roz come up with a provocative piece comparing the horrific discrepancy between both investigations, along with political corruption.

As stated in the end credits, the series was inspired by The Anchorage Daily News and Pro Publica Series ‘Lawless Sexual Violence in Alaska’ by Kyle Hopkins, who serves as a producer.

Unfortunately, episode six concludes with a cliffhanger – and episode seven is not scheduled to air until Thursday, February 23. That’s the week when ABC’s Grey’s Anatomy and Station 19 also resume.

Will anyone still be interested? That remains to be seen, doesn’t it? Meanwhile, you can always retrieve Men in Trees and Northern Exposure, two previous series based in Alaska.

On the Granger Gauge of 1 to 10, Alaska Daily is a struggling 6 – on ABC-TV and streaming on Hulu.