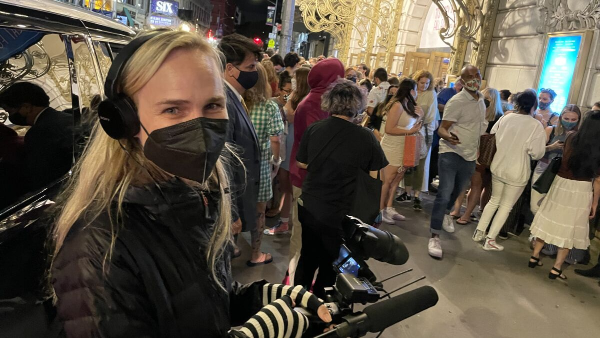 Post-Covid, my return to Broadway came in third-row tickets to Company. As the first notes of the overture played, I wept. I was home. After 9/11, Broadway dimmed its lights for two days. Beginning March 12th, 2020, Broadway closed its doors for 551 days. Amy Rice’s documentary Broadway Rising takes us on the ever-evolving journey of an industry that was stopped in its tracks overnight. The number of people affected by Covid-19 goes far beyond what anyone realizes. What happens when an entire creative industry comes to a halt in a city? Broadway Rising is another keen example of New York’s inextinguishable flame to inspire the masses.

Some of the first infected in the industry, many of them hospitalized almost immediately, spoke about the instantaneous financial ruin and unimaginable fear. Costumers, ushers, dry cleaners, stage doorman, actors, dancers, and directors had their livelihoods stolen in a way that is unique to what they do. The community lifted one another with video collaborations through everyone’s love-hate relationship with Zoom. They shifted platforms and used their talents to teach, while others had the bravery to dive into an entirely new venture, exclusively hiring out-of-work performers.

Director Amy Rice follows some of the big names we know, like Patti Lupone, Antoinette Chinonye Nwandu (Pass Over), Sara Bareilles (Waitress), and those creative essentials that are not household names. Producer Tom Kirdahy following the death of his playwright husband, Terrance McNally, stage doorman Ernie Paylor whose battle with Covid resulted in the loss of his foot, and Meghan Toohey, pit musician for Waitress.

George Floyd’s death had an entirely different impact during the shutdown. Broadway took stock of its own racism and representation. The need to include and support BIPOC creators was all of a sudden a glaring injustice. When Cuomo declared it safe enough to turn the marquee lights back on, seven new plays opening on Broadway were penned and performed by casts of color. It was unprecedented, but it should not have taken that long. The work continues. BIPOC marketing must flourish.

Waitress would not be complete without the story of Nick Cordero. Amanda Kloots and I were in the same class at AMDA. Watching her fight and stay positive through the most emotionally trying times, I felt like a family member had been stolen from me, too. And that’s the thing about the theatre community. We are family. The time and sacrifice, the blood, sweat, and tears, the injuries, and the relentless need to create art, all of these aspects make a family.

As science advances behind the scenes, the marriage between Covid safety, production companies, and crew remains essential. Dr. Adamson, the creator of the NBA bubble, created the system to protect the Broadway community through regular testing. My best friend from college and writing partner transitioned from acting and Broadway PR to a Covid safety officer. He just returned from the Spamleton tour last week.

Broadway Rising pulls back the curtain on all the people who inspire storytelling in its most glorious form. We rely on the audience for equal care when they come to the theatre. If a theater asks you to wear a mask, please listen. As Lin-Manuel Miranda says in the film, “We are like Tinkerbell. We need applause to live.” The show must go on. Let us entertain you.