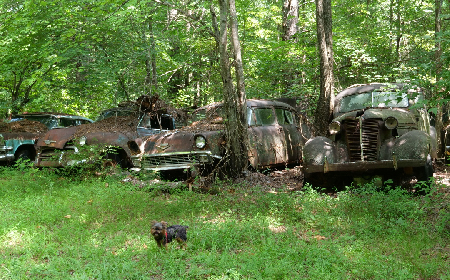 Director and producer Stacey Tenenbaum’s documentary Scrap is an elegy for refuse, specifically metal, ranging from clunky cars to tiny cell phone chips. She takes us around the world for short visits with people who’ve repurposed and/or restored discarded items, revealing the deeply personal joy of rescue that’s also a rebirth. We visit a sprawling junked car graveyard in rural Georgia; a grandmother who lives with her family in abandoned airplane cabins in Bangkok who scrapes out a living by taking money from tourists and balking at the term “graveyard.” A graveyard is for the dead, she explains; she and her family are living. The magnificent sculptures that a Montana man crafts from discarded farm machinery turn out to be his way of channelling grief. A waste site in India, where a young woman photographs workers as they sift through mountains of old cell phones, is reminiscent of Waste Land, the 2010 documentary about pickers at the world’s largest landfill in Rio de Janeiro.

There’s also a massive ship in Spain that’s being cut up so its hulking metal can be used to construct a church and an aging trolley expert who still dreams of restoring his collection of graffiti-covered cars that sit, as if waiting patiently, in a pasture in the middle of nowhere. A man in Great Britain painstakingly restores iconic red British telephone booths from rusted, peeling, neglected, no-longer-needed enclosures to their eye popping, classic, original luster. The film is a metaphor-rich journey that offers the chance to spend time with passionate, creative characters and a meditation on the things we abandon and the things we save.