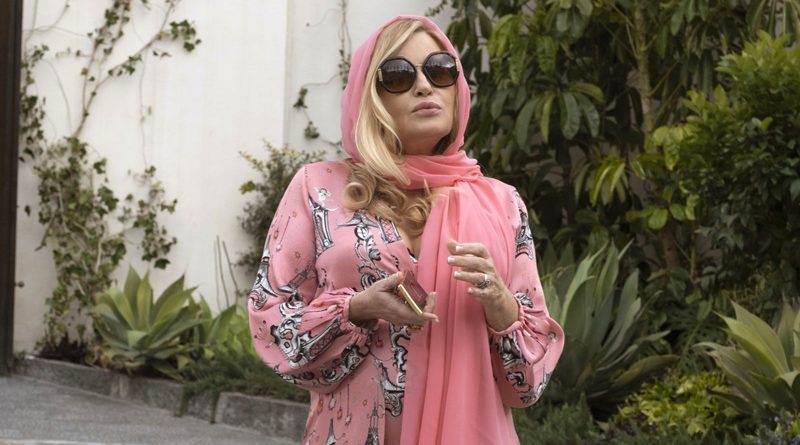 For its Emmy-winning initial season The White Lotus was set at a luxurious Hawaiian resort. Now, The White Lotus: Season 2 moves to a deluxe Sicilian hotel, perched on the cliffs of Taormina overlooking the Ionian Sea. It debuted on October 30 and will conclude on December 11th.

“It’s a different vibe,” clarifies series creator/writer/director Mike White. The first was focused on the guests vs. the employees – who has the money, who has the power – set against a colonialism backdrop. While still revolving around decadent, rich discontents, the second season is more about sexual politics with elements of a bedroom farce as people sneak in and out of hotel rooms.

Jennifer Coolidge returns as blowsy, insecure heiress Tanya McQuoid, now married to Greg (Jon Gries) whom she met on Maui. She’s accompanied by a harried assistant (Haley Lu Richardson), who wants a fun fling, particularly when Tanya is distracted by a gay British aristocrat (Tom Hollander) and his friends.

The strong ensemble cast includes F. Murray Abraham as a lecherous Italian-American octogenarian, determined to explore his ancestral roots with his sex-addicted, Hollywood producer son (Michael Imperioli) and amiable grandson (Adam DiMarco). One day, he hires a car to take his family to the various local sites featured in “=The Godfather films.

An oblivious wife (Aubrey Plaza) and her financier husband (Will Sharpe) are hosting a newly rich couple (Meghann Fahy, Theo James). When the wives take a side trip to Noto, a town known for its Baroque architecture, their husbands jet ski and indulge in drunken debauchery.

Problem is: we know that dead bodies have been found – so there’s also a murder mystery.

Décor-wise, there are bizarre ceramic ‘heads,’ based on a local legend originating in the 12th century when Arabians occupied Sicily. It seems an Italian woman was seduced by a Moorish man. When she discovered he was married with children, she cut his head off and stuffed it with basil, which grows everywhere.

On the Granger Gauge of 1 to 10, The White Lotus: Season 2 is an opulent, indulgent 8, streaming on HBO – with an upcoming third season already confirmed.