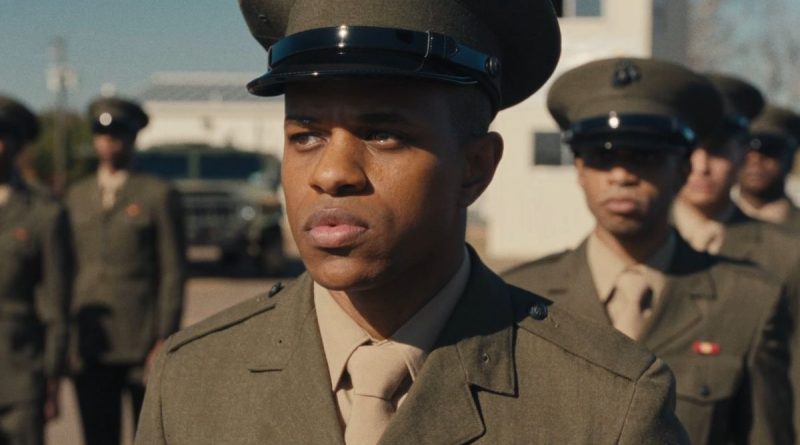 The Inspection charts a gay Black man’s struggle to become a Marine.

Some “inspired by a true story” narratives are self-indulgent and strained. Not writer/director Elegance Bratton’s autobiographical The Inspection detailing his own courageous determination to become a Marine. As the protagonist gay Black man Ellis French says, “Most of my friends are dead or in jail. If I die in this uniform, I’m a hero to somebody.”

As events begin in Trenton, New Jersey, November 2005, Ellis leaves his homeless shelter to visit his homophobic mother Inez, ironically a corrections officer. Ellis needs his birth certificate; he gets verbal and emotional abuse. First Inez assumes he’s in trouble, then comments, “This piece of paper is all I have left of the dream I had for you. If you don’t come back the son I gave birth to, consider this certificate void.” Director Bratton received this and harsher treatment from his own mother, who didn’t speak to him for sixteen years. In interviews he’s said she was the first person to love him completely and then to reject him. She died a few days after The Inspection production began but hovers as the catalyst for Ellis’ behavior.

Explicitly in the film and in his life, Bratton says he longed for her respect, telling her, “I’m never giving up on us.” As part of his progress, Bratton learned that he must gain respect for himself first. Ellis will have to fight fiercely for that throughout boot camp as will a Muslim recruit. Gunnery Sergeant Laws imposes brutal training and merciless hazing. He shouts, “Our job is not to make Marines but to make Monsters.” Laws seems intent on exactly that. In one frightening swimming pool scene, Jeremy Pope, who plays Ellis, literally almost drowned. In addition, Ellis’ fellow recruits quickly grasp he’s gay and humiliate him. Ellis’ victory will prove hard won and deeply moving.

Throughout The Inspection, Jeremy Pope powerfully and convincingly inhabits Ellis French, his body posture and voice changing during his journey. As Inez, Gabrielle Union never flinches from her cruelty toward Ellis, nor does a terrifying Bokeem Woodbine as Sergeant Laws. As officer Rosales, Raúl Castillo conveys a more supportive reaction, though homoerotic overtones permeate many scenes. Cinematographer Lachlan Milne and editor Oriana Soddu enhance the mood, while it is the acting and the message—you are worthy of love—that recommend this exceptional film.