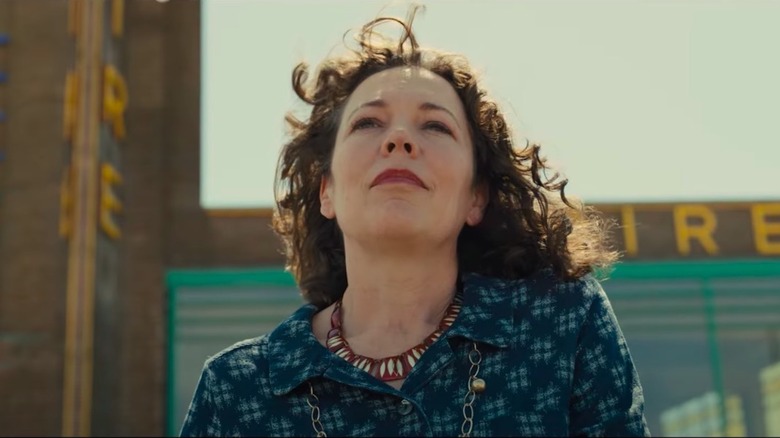 Additionally complicated by Hilary’s mental challenges and her boss’ sexual abuse, the story incorporates a spectrum of issues presented in an engaging package that makes its points without sentimental or sensationalized depictions, an impressive delicate balance. In other words, ethical stands receive strong, intelligent endorsement. Adding significant minor details, one subplot revolves around the Empire granted the premiere of the 1981 Chariots of Fire, that film an implicit condemnation of anti-Semitism and Nazi power.

On a lighter note, adding to the multifaceted narrative, the projectionist Norman gives an educational explanation of film projection as it existed before digital took over. Empire of Light is, in part, a love letter to 1980s cinema, and all I loved of the often awe-inspiring experience in a luxurious movie palace. What writer/director Mendes does is go behind the scenes to bring to life the culture of those who whisked viewers into another world while battling their own demons and society’s racism, sexual predation, and mental health struggles. Behind the glimmer and glamor of that magical theater and blinding projector’s light existed a real, troubled world from which imagination offered escape, the establishment of a surrogate, supportive family.

Mendes tunes into and beautifully captures this reality, with lighting and compositions changing from the lovely Empire, colorful and bright, to Hilary’s dark, claustrophobic apartment. Olivia Colman’s brilliant performance threads its way through these moods with convincing nuances and shifts verbally and nonverbally. As Stephen, Micheal Ward compellingly expresses his wariness, receptivity to kindness, and strength in a racist environment. In a strong supporting role, the always dependable Toby Jones as the projectionist Norman makes his job feel special and enchanting. Another dependable actor, Colin Firth presents theater owner Donald Ellis as the sleazy, opportunistic boss he is. Empire of Light is the actors’ film delivering Mendes’ admirable, substantive insights.