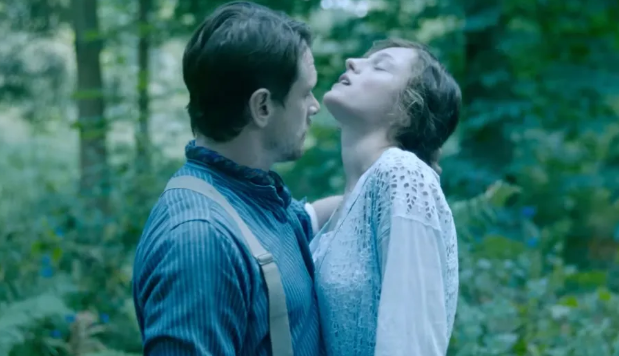 French actress-turned-director Laure de Clermont-Tonnerre (The Mustang) delivers an affair to remember in her new Netflix adaptation of D.H. Lawrence’s classic tale, Lady Chatterley’s Lover, starring Emma Corrin and Jack O’Connell. A then-controversial and scandalous novel when it was written, the boldly sexual story about a married upper-class woman’s tryst with her working class groundskeeper lends itself well to Netflix fans who have binged on Bridgerton and are eager for the next period romance.

Constance “Connie” Reid (Corrin), who comes from an upper-class and free-spirited household, marries aristocrat Clifford Chatterley (Matthew Duckett) on the eve before he sets off to fight in World War I. When he eventually returns to his bride, he is paralyzed from the waist down and confined to a wheelchair. In the beginning, Connie dutifully attends to her husband until he learns that it is likely impossible for him to sire an heir. Encouraging his wife to enter into a “transactional” sexual encounter in order to get pregnant, he pushes Connie into the waiting arms of groundskeeper Oliver Mellors (O’Connell). A veteran whose war wounds come from an unfaithful wife, Mellors is educated and well-read, sensual and sensitive – precisely everything Clifford is not. Cue Connie’s sexual awakening as the two embark on an erotic affair with consequences that resonate throughout the village.

With a screenplay by David Magee (The Life Of Pi), de Clermont-Tonnerre’s film succeeds on the red-hot chemistry between leads Corrin and O’Connell and her approach to the (many) sex scenes. While mostly faithful to Lawrence’s novel and even previous adaptations, de Clermont-Tonnerre films the story from Connie’s point of view, turning the story into a journey of personal erotic awakening. Centering the story around Connie gives agency to female sensuality and pleasure as it subverts the more tried and true approach to restrained female sexuality in period pieces, heightened by a score by Isabella Summers. The camera’s gaze is on Mellors as the lovers exchange meaningful glances and roll around in the buff and as Connie’s own sexual pleasure gets its close-up, offering a fresh perspective on the story (and full frontal male nudity).

Corrin and O’Connell are undeniably sexy together on-screen. Corrin, who perfected the demure-but-knowing glances as Princess Diana in The Crown, uses their eyes to convey so much on film as Connie transitions from excitable newlywed to jaded wife to a woman coming into her sexuality with a burning intensity. Against the light, blue-tinged cinematography by Benoit Delhomme, the sumptuous costumes by Emma Fryer are all the more impressive as the breezily gauzy dresses and fiery red gown of Connie are left to stand out in every frame.

O’Connell is superbly cast, bringing an earthiness to Mellors that once again might leave viewers wondering why he hasn’t become a bigger star in North America after roles in ’71, Unbroken, and The North Water, among others.

It is hard to compare to the fire ignited whenever Corrin and O’Connell are on screen, leaving co-star Duckett not much to do in his role as Clifford. Joely Richardson, who herself played lady Chatterley in the 1990s’ miniseries, gives a small but pivotal turn here as Clifford’s nursemaid Mrs. Bolton.

In this adaptation the class-conflict between the aristocratic society and the working miners is brushed aside, only to rear its head on one of Connie’s trips to the village and in passing as Clifford turns his attentions to the mines. But this has little impact on the overall story de Clermont-Tonnerre is trying to tell, so its exclusion from the film isn’t a detriment.

Screening in select cinemas on November 25 before its debut on Netflix on December 2, Lady Chatterley’s Lover should appeal to viewers looking for a dose of period drama.