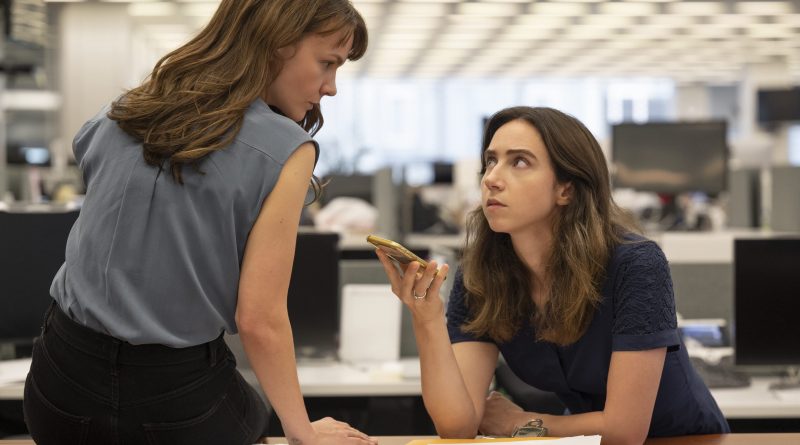 It’s been five years since Hollywood mogul Harvey Weinstein went from being a producer thanked at copious awards podiums to shorthand for a sexual predator. Now, as he undergoes his second trial on rape charges, the drama She Said arrives in theaters, dramatizing the New York Times reporting that began his downfall.

Based on the book of the same name by Times reporters Megan Twohey and Jodi Kantor, the film has almost too much ground to cover. Over 80 women have accused Weinstein of sexual misconduct since these writers and Ronan Farrow in The New Yorker reported on Weinstein’s behavior, providing documents and statements from ex-employees at Miramax and The Weinstein Company. Quoting stars such as Ashley Judd and Mira Sorvino, their work earned Twohey, Kantor, and Farrow the 2018 Pulitzer Prize for Public Service. It also helped fuel the #MeToo movement and eventually resulted in criminal charges, for which Weinstein was convicted in New York City, receiving a sentence of 23 years in prison.

The film doesn’t give viewers a sense of the power broker that Weinstein once was, presumably because memories are still fresh, which might put viewers coming in cold years from now at a disadvantage. Nevertheless, She Said is a solid, engrossing portrayal of these women journalists and the legwork that exposed his decades of behavior. It’s a behind-the-scenes journalism film in the vein of All the President’s Men and Spotlight that gives female reporters their due, with lived-in details about these writers, both moms with supportive spouses and colleagues. It also shows the frustration and the underlying bond among the women who spoke publicly about what they had endured.

Real-life journalism is rarely cinematic. (I say that having covered a crime beat for ten years.) Behind each written word lies ignored phone calls, rejections, document searches, skittish and irritable people, meetings that circle around uncomfortable topics, and a lot of hustle. Director Maria Schrader (I’m Your Man) and screenwriter Rebecca Lenkiewicz (Small Axe) use these hurdles to show the reporters’ tenacity and intelligence, creating a surprising amount of dramatic tension and momentum.

Fresh off a rocky maternity leave—and reporting on Donald Trump’s treatment of women before his 2016 presidential election—Twohey (Carey Mulligan, The Dig) seems weary when discussing the rumors and allegations about Weinstein that Kantor (Zoe Kazan, The Plot Against America) heard from a feminist group. The investigation gains traction after Kantor speaks by phone with actor/activist Rose McGowan (Keilly McQuail), who relates how Weinstein raped her at a film festival; she won’t speak on the record because of a settlement and prior treatment in the press. Neither at first will Ashley Judd (playing herself), noting how she lost jobs after she complained about Weinstein propositioning her.

Like their portrayers, the two journalists soon play to each other’s strengths, the flintier Twohey often parrying with lawyers and Miramax officials while Kantor channels compassion and sincerity, reaching out to woman after woman. (“You’re less intimidating,” Twohey tells Kantor, leaving Kantor unsure whether she’s offended.) With the backing of editor Rebecca Corbitt (Patricia Clarkson, Monica), the two find other women whose dreams of working in movies Weinstein shattered.

Former assistant Zelda Perkins (Samantha Morton, The Whale) relates how she’d hoped the conditions of her settlement would cause changes at Miramax. Another, Rowena Chiu (Angela Yeoh, The Baby), describes swallowing her shame and almost taking her life. Laura Madden (Jennifer Ehle, Saint Maud) recounts how she stumbled across a film set while walking her dog and landed a job with the crew. The film shows her in her twenties, disheveled and crying as she runs down a street, then lets Ehle describe what happened alongside shots of an empty hotel room. “It was like he took my voice that day, just when I was about to start finding it,” she says.

As for Weinstein, he appears only as the back of a head and a bombastic voice, mostly threatening legal action and at least twice demanding to know if the reporters have spoken to Gwyneth Paltrow. That’s curious, considering Paltrow wasn’t in the initial New York Times story and here speaks to the reporters only offscreen. In real life, Paltrow later revealed that then-boyfriend Brad Pitt, a She Said producer, warned Weinstein to stop bothering her, one of many people aware of Weinstein’s behavior.

In focusing on how the Times broke its initial story, She Said only briefly touches upon a larger one: the system that protects abusers. While the film doesn’t indict Weinstein’s enablers as satisfyingly as one might hope, it generates admiration for the women who came forward and the journalists’ fortitude. At one point, Twohey fears the story will run, and no one will care. Kantor replies with an almost rhetorical question: Can you imagine how many others there are like him?