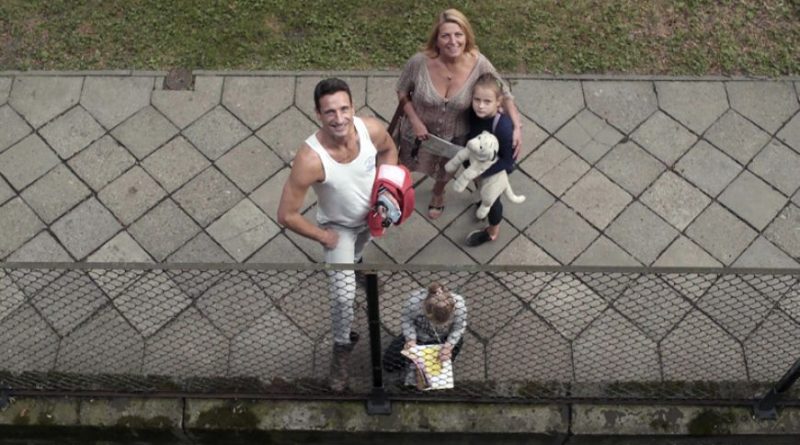 The Balcony Movie documents interaction with dozens of passers-by.

One clever documentarian, Polish director Paweł Łoziński, turned his pandemic isolation into a fascinating, revealing interaction with neighbors in The Balcony Movie. Shooting entirely from his second floor balcony in Warsaw, over two-and-half years, Łoziński asks questions and listens to random passers-by who agree to talk with him, and some don’t but are still included.

For many, the camera’s distance clearly makes them feel safe, and, as a result, several individuals unburden themselves in remarkable ways, returning repeatedly to nurture their contact with Paweł. At a post-screening discussion at this year’s True/False Film Festival where I saw the film, director Łoziński affirmed that “during the COVID lockdown, this film saved my life.” I’d venture to say that it greatly helped these men and women as well.

Because he talked with two thousand people, it took Paweł over a year to edit the documentary, having to shape the randomness of his conversations, teasing out several themes, letting some of that arbitrariness remain, as in the flow of any life. Subjects, most of them Polish, include children, men and women of all ages, including a woman pushing a wheelchair, one relying on a walker, an ex-con, one with her lawnmower, his wife Agnieszka walking their dog, and his daughter; in other words, a diverse hodgepodge. One sings beautifully, another dances, yet another does some magic, several complain, many question Paweł. He knew a few previously, others become confidants, establishing a confessional relationship through the filming. One of the most moving moments comes via an elderly couple, silently observed, walking in step together.

The central questions Paweł asks are who they are and what’s the meaning of life. Replies range from their life is a mess to “I have no idea,” from how wonderful to be alive to how profound life is. The best answer is, “Life is meaning. That’s enough.” Most striking, everyone bares so much in brief snippets, some charming, others contentious, almost all curious. All disclose a great deal about themselves and contemporary Poland through their comments. These fascinating interviews prompt me to answer the same questions, more aware than ever of how much I define myself by my answers. And I listen more carefully to others. The Balcony Movie is in Polish with English subtitles, streaming on MUBI.