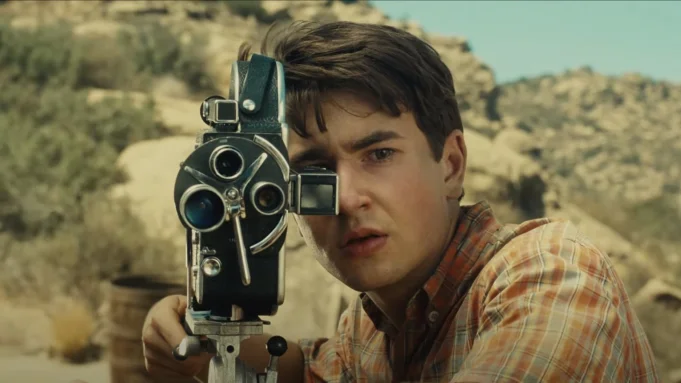 The creative life is a circus for an artist, with allures impossible to resist. Director Steven Spielberg’s semiautobiographical drama The Fabelmans shows his early fascination with movies; yet instead of making himself the focus—a portrait of the blockbuster pioneer as a young Steven, if you will—he crafts an intimate story that credits his parents as his inspiration.

That dynamic appears in the film’s first minutes as young Sammy Fabelman (Spielberg’s avatar) stands on a snowy New Jersey sidewalk, refusing to enter a local theater. It’s 1952, Cecil B. DeMille’s The Greatest Show on Earth is playing, but the boy, who’s about five, is afraid of the darkness and the actors looking larger than life.

His dad, Burt (Paul Dano, The Batman), a technical whiz and future computer specialist, talks up the science, explaining how a film is a series of images projected at a certain speed. His mom, Mitzi (Michelle Williams, Fosse/Verdon), a skilled pianist before having children, aims at Sammy’s heart. “Movies are dreams, doll, that you never forget,” she says. “When it’s over, you’ll have the biggest, sloppiest smile on your face.”

Moments later, several people in my screening audience laughed as Burt and Mitzi exchanged worried glances in their theater over Sammy’s head. The boy gaped at a train wreck in DeMille’s film, watching the freight cars and a convertible fly.

Thankfully, Sammy is more fascinated than horrified. He asks for an electric train set for Hanukkah, then sets about staging his own crash. While his dad scolds him for being sloppy with his toys, his mother figures out he wants to understand and control the chaos he saw. She suggests filming a crash with Burt’s camera so Sammy can watch what happens whenever he likes. Thus begins another great show, one that tugs at Sammy through his teens as he deals with antisemitism, relocations for his father’s jobs, his mother’s depression, and his parents’ eventual divorce.

Chock-full of nostalgia, The Fabelmans is at its best when it depicts Sammy’s whimsy and artistic angst along with his films’ impact. He says the camera sees what it sees, that he does nothing, but then we’ll watch his crosscutting that turns spoonfuls of ice cream at the beach into something unpleasant and a bully into a radiant hero who’s uncomfortable with the adulation. We’ll go behind the scenes of a wartime shootout, decades before Spielberg’s masterful Saving Private Ryan, where Sammy uses a baby buggy as a makeshift dolly and stirs such pathos, he moves his actor and Mitzi to tears. We’ll even see how Sammy’s footage shows him things he doesn’t notice in real life, causing a crisis of conscience and understanding.

The dramatic tension sometimes lags over the film’s two hours and 31 minutes because of the family melodrama, and the script by Spielberg and longtime collaborator Tony Kushner (Munich, Lincoln, West Side Story) feels more like a series of vignettes instead of a cohesive narrative. That said, the vignettes are often amusing. Sammy (played as a teen by Gabriel LaBelle, TV’s American Gigolo) dates a Catholic girl who sneaks in kisses between prayers. His grandmother carps at Mitzi’s fondness for disposable tableware, and Sammy’s sisters grumble he must not like girls because they never take the lead in his films.

The performances are uniformly fine. Dano portrays Burt as inherently kind and decent yet so esoteric and intelligent, his personal interactions can be awkward. He dismisses Sammy’s films as a hobby, but he’s also impressed enough to ask Sammy to make a film to console Mitzi after her mother dies. Spielberg places Burt in the foreground at this moment, but Dano conveys how vulnerable the dad feels. Later, when Sammy needs consoling, he’ll be in the foreground as his father builds him up with the wisdom only life experience provides.

Williams shows Mitzi’s free spirit and hearty laugh as disguises for her disappointment over giving up her own artistic dreams. She’s proud that her son is more like her and wants his artistry to grow. Yet she also wants more from her own life and is afraid to ask for it.

Seth Rogen (The Boys) is understatedly effective as a key family friend, and Judd Hirsch (The Goldbergs) drops by for a brief yet colorful turn as an uncle who actually joined the circus. He recognizes a similar creative calling in Sammy, even if the boy at the time doesn’t want to face it.

With longtime Spielberg collaborators John Williams providing the score and Janusz Kaminski handling the cinematography, The Fabelmans could easily be a love letter to cinema, yet Spielberg has a more human scale in mind. At its heart, The Fabelmans isn’t about the films Sammy makes but the people who help him embrace his talent and the emotional power he discovers through images that marry art and science—qualities each of them loved in life.