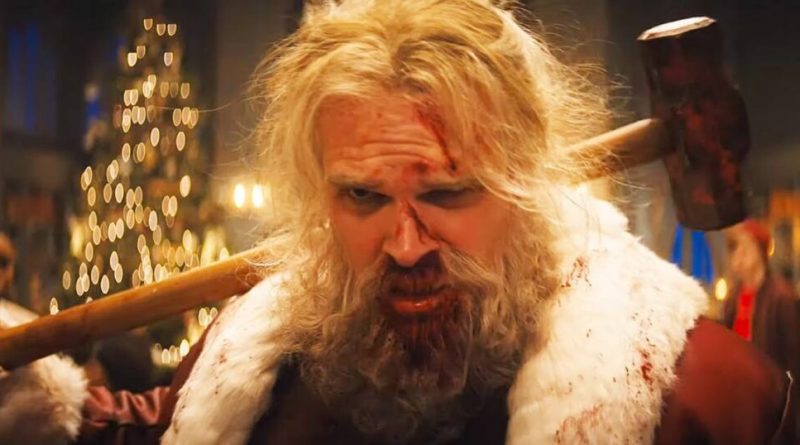 Violent Night, bloody night!
All is NOT calm, all will give you a fright.
Round yon father, mother and child.
In a hostage situation where all goes wild,
Santa makes violence cease,
Santa keeps the family peace.

Violent Night is Die Hard meets Home Alone. Our favorite Christmas flicks are mashed up in a night of mayhem with a less than sober Santa slaying the day.

Jason Lightstone, his estranged wife Linda, and daughter Trudy travel to Connecticut to be with his extremely wealthy yet dysfunctional family at their estate on Christmas Eve where a gang of bandits, led by John Leguizamo, invade the clan and hold them hostage. Unbeknownst to all but young Trudy, Santa Claus is on property delivering gifts when he’s called into action.

David Harbour, of Stranger Things fame, is the not so jolly sledgehammer and spirits slamming Saint Nick who’s ready to give up his high flying life on the road. It’s driving him to drink. He makes Bad Santa look like a pansy. You don’t want to be on his naughty list. He has a resting Grinch face.

Despite being such a crass Kris Kringle, Harbour manages to spread some holy day magic in this far-fetched, R rated fracas that will leave the blood splattered audience cheering at the end of this Yuletide yarn.

Parents, don’t let your kids sit on this Santa’s lap, but if you’re in the mood to get your own tinsel in a tassel, Violent Night gets a 7. It may be a new holiday tradition? My husband Ricky kept 2 👀 open.