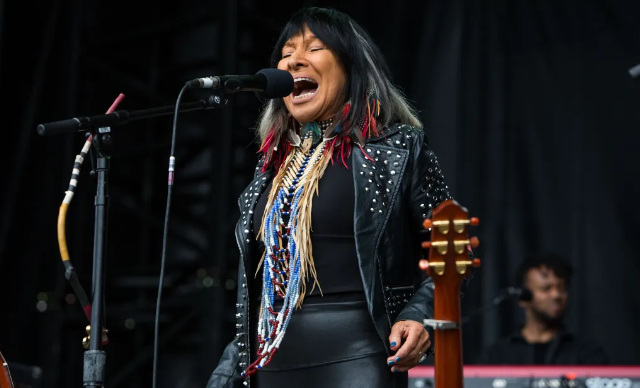 Before Indigenous Rights, before Truth and Reconciliation, before remote collaboration, there was Buffy Saint-Marie.

Taken from her home as part of the Sixties Scoop, and given to a family in Wakefield Massachusetts, Saint-Marie grew up removed from her culture but the self-taught musician eventually found her voice, becoming an activist and providing a voice to Indigenous peoples everywhere.

With a mix of previously unseen archival footage, interviews with friends, family, and colleagues, as well as unprecedented access to the artist herself, Madison Thomas’ Buffy Saint-Marie: Carry It On, is an eye-opening look at the Saint-Marie’s personal life and professional career, from her early days as a folk artist in New York City, her turn as a mother and TV personality, her work as a composer and writer, but always – always – an activist.

Throughout the course of the documentary, Thomas highlights that Saint-Marie never walked away from her heritage and beliefs and how she not only gave voice to herself but paved the way for, at this point, generations of others who followed in her footsteps; Indigenous youth and people whose lives and careers benefited from seeing one of their own not simply on the public stage but speaking her truth at every opportunity.

Thomas and editor Brina Romanek unpack Saint-Marie’s life with both a timeline and key moments, approach, which adds great perspective to the artist’s career with historical context of whatever else was happening at the time. As a music fan, perhaps the most interesting aspect for me was learning of Saint-Marie’s early adoption of computers and the making of Coincidence and Likely Stories. While admittedly a small blip in her illustrious career, it’s a fascinating insight into her creative process, and alongside her comments on song writing and creative inspiration, it makes for some of the most interesting moments of the documentary.

While much of the material covered by Thomas is not new to fans of Buffy Saint-Marie, Buffy Saint-Marie: Carry It On offers a wealth of insight for fans and non-fans alike; fans will appreciate the artist speaking about her life and career in her own voice, while others will learn a little more about Saint-Marie and hopefully understand why she is such an essential part of cultural history, beyond the fact that she’s written some amazing, genre-defying songs that continue to stand the test of time.