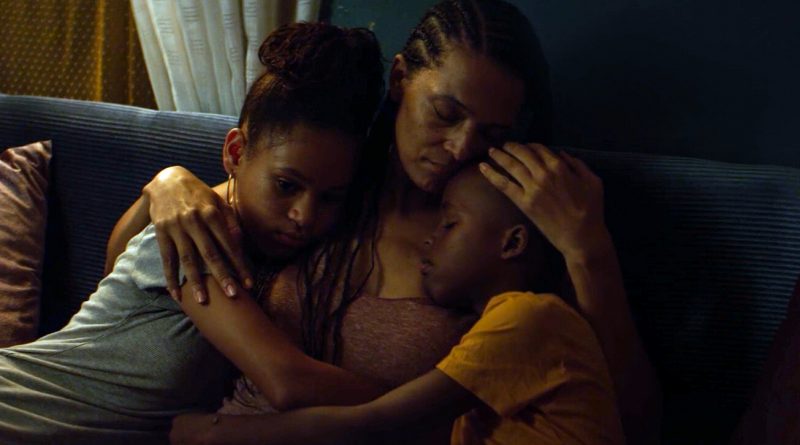 Bantú Mama, the Dominican Republic’s nominee to the International Oscar category this year, is about a French-Camaroonian woman who gets caught attempting to transport drugs out of Santo Domingo but escapes police custody and has to hide out in the slums until she can leave the country. It’s a slow-moving story full of evocative detail, and it stars an impressive and largely unknown (at least to international audiences) cast led by Clarisse Albrecht, also the film’s co-writer with director Ivan Herrera, and Scarlet Reyes.

Any slum-set film from Latin America faces inevitable comparison to Fernando Meirelles and Kátia Lund’s landmark 2002 film City of God. Bantú Mama feels like that movie’s quieter, female cousin. Unlike the raucous pace and marked violence of the earlier film, Mama is full of quiet moments and symbolic images. A hand-held camera follows the characters closely, dwelling on their faces. Not a lot happens in many scenes, though a lot is conveyed. The central character Emma (Albrecht) is, of course, a woman, and so is the middle child of the family that takes her in.

T.I.N.A. (Reyes) and her big brother, $hulo (Arturo Perez), find Emma on the side of a river after she’s escaped police custody. It’s Tina who suggests they take her in and who nurses her back to health, introduces her to their culture and negotiates her passage out of Santo Domingo. Teenage Tina’s character is a boss, full of precocious confidence and a filial power she enjoys wielding (we deduce her imprisoned father must be a big wig in the barrio; her mother has died). She doesn’t mind breaking rules, she doesn’t fear authority figures and she takes whatever she needs to survive.

This confidence is admirable but, of course, it’s also clearly born of an excessive necessity. Without spoiling the ending, Tina reveals she is fully cognizant of the limited circumstances and horizons in the slums of Santo Domingo for her and her siblings. She is especially protective of her younger brother, Cuki (Euris Javiel), who also bonds with Emma as a mother figure. The title of the film refers to Emma’s tribal heritage and the role of mama thrust upon her when she’s taken in by the three parent-less children. However, Tina is a mama too.

And the mama-land is Africa. Emma yearns to know her Camaroon roots. She gets her hair braided while on vacation, and her apartment in Paris is dotted with African masks and décor. There’s a flash forward of Emma wearing a golden dress and staring out of a doorless framed structure at the expansive sea, bright in the African sunlight. It could be reminiscent of the coastal structures where Africans were held and shipped off to the Americas. A scene has Emma and the three siblings jumping like the warriors of the Maasai tribe, all slow-motion childlike joy in a sea of scarcity. Emma teaches Tina how to wear a headscarf to send different messages.

The film shifts drastically between very dark indoor or nighttime scenes and bright, sunlit settings. Likewise, the characters all aim to escape from darkness toward light. It seems Africa represents that light, at least to Emma. Shulo tells Cuki he can grow up to be either a tiger or a dove. “You’ll be a tiger,” the older boy insists. “You don’t have to be a tiger,” Emma whispers. But she knows a precious little boy cannot grow up as a dove and survive in their circumstances. Maybe in Africa.