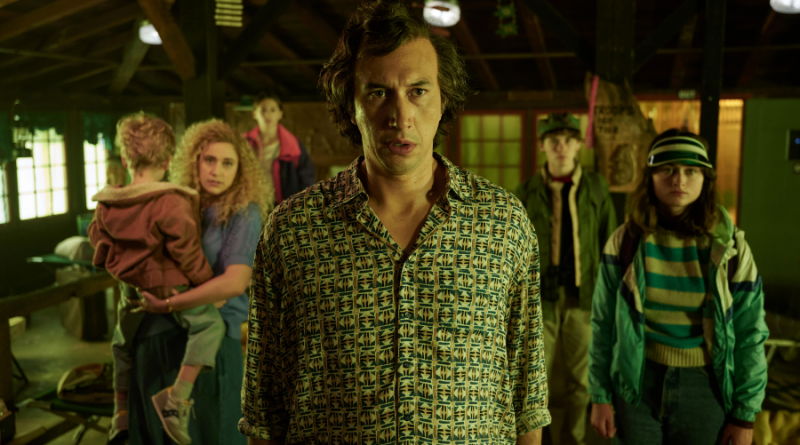 In White Noise, Noah Baumbach again, and comically, proves he knows exactly how to excavate the dynamic inner workings of a family and the dysfunctional society which empowers its members. At face value, the ironically named Gladneys offer a spectrum of amusing individuals. J.A.K. i.e., Jack, Professor of Hitler Studies at the College-on-the-Hill, proudly lectures in the classroom.

Away from his student audience, he struggles to articulate the most basic German, tongue-tied and defeated. In lunchroom exchanges, theories and defenses fly. Meantime Murray, Jack’s rival who praises the positive takeaway in car crashes, invites him to an impressively choreographed point/counterpoint class debate contrasting Hitler and Elvis, Jack and Murray roving the room. If only college offered such unhinged fun.

Jack’s wife Babette, their baby, Jack’s son Heinrich and daughter Steffie, and Babette’s daughter Denise offer equally entertaining verbal riffs. These include everything from a fascination with all tragic crashes to Heinrich’s self-confident, albeit deeply flawed, scientific analysis of everything. And there’s more to examine in Baumbach’s adaptation of Don DeLillo’s 1984 novel set in the same time period. Danger looms, literally in the form of a black toxic cloud resulting from a train crashing into a tanker carrying flammable chemicals, what in the film’s chapter two of three is identified as The Airborne Toxic Event.

A frantic evacuation ensues, questions arise about Babette’s furtively consumed pills called dylar, an investigation follows into the formula and source, and a marriage comes under scrutiny. The through line is Jack and his wacky family, absurd events played straight, with quick scenes delivered with overlapping dialogue at times, screwball comedy style. As a reflective, self-absorbed Jack, Adam Driver again works his magic, charismatic and amusing because he doesn’t play for laughs. Greta Gerwig brings a solid appeal as the often perplexed and sympathetic Babette. The children all seem right at home with the activity and their personas. White Noise’s brightly lit, playful, upbeat finale in the A&P is the joyful piece-de-resistance that put a smile on my face with its perfect antidote to Gladneys’ travails.