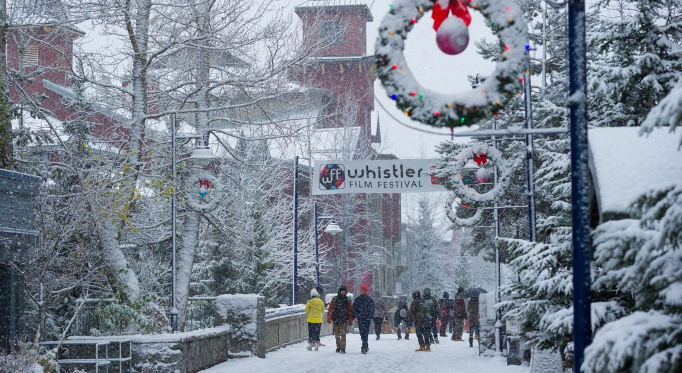 The Whistler Film Festival, held from November 30 to December 4 in person in beautiful Whistler, British Columbia welcomed movie lovers back to Canada’s coolest festival with a slate of programming highlighting films by women filmmakers.

It was a blockbuster return to in-person screenings as the snowy ski village resort two hours from Vancouver was abuzz over the weekend. For the tenth consecutive year, the Alliance of Women Film Journalists has partnered with the Whistler Film Festival to honour a feature-length and short-film film directed by women at this year’s festival. Shortlisting a total of five feature-length films and ten short films for the coveted award, the Whistler Film Festival’s 22nd edition had no shortage of women-helmed films as the festival and its executive director, Angela Heck, actively work towards gender parity.

“Addressing the imbalance of representation in the screen industry has been a mandate of the Whistler Film Festival for many years,” Heck says. “Our advocacy for gender parity has expanded to reflect our overall commitment to diversity, equity and inclusion. There is much work to do as we continue to cultivate and champion underrepresented communities in our programs, our stories and in the Canadian media industry at large.”

Two of the festival’s biggest awards –Best Director and the Borsos Competition for Best Canadian Feature were awarded to women at this year’s festival. The coveted Best Canadian Feature Film award comes with a cash prize of $15,000 went to the emotionally engaging drama Coyote (La Coyote), written and directed by Katherine Jerkovic. The award, presented by the Directors Guild of Canada, British Columbia, in association with Telefilm Canada, is the second-largest festival prize in Canada. With the Whistler jury calling it “a masterfully rendered film, both tragic and hopeful, about unconditional love and sacrifice. A film that holds you in poetic stillness and takes you on a genuine familial journey that resonates with you long after the film is over,” Coyote tells the story of Camilo (Jorge Martinez Colorado), a Mexican immigrant who used to run a successful restaurant before it closed but now works at a cleaning company. Just as an old friend offers him a culinary job in the suburbs, his estranged daughter asks Camilo to take care of her young son while she is in rehab, leaving Camilo to choose between rebuilding his family and a fresh start. Star Colorado received this year’s Best Performance in a Borsos Competition Film Award.

For her work directing the French-language sensitive father-daughter drama Rodeo, Quebec filmmaker Joëlle Desjardins Paquette won Best Director of a Borsos Competition Film Award. The jury stated, “Rodeo is a visceral, gripping, and emotionally complex ride directed with a confident and intuitive eye set in the unique and dangerous world of truck rodeo.” The film is a father-daughter road trip set among a truck racing circuit aka a truck rodeo.

Still to be announced, the Alliance of Women Film Journalists will reveal the EDA Award winners from the Whistler Film Festival on December 13.

With the in-person portion of the festival over, this year’s Whistler Film Festival once again put women’s stories in the spotlight.

Among the highlights of the female-directed programming include actress Vanessa Matsui’s confident first feature Midnight At The Paradise. The Toronto-centric story is an ode to lost love, evolving relationships, and cinema above all else. Featuring a small but strong ensemble of Canadian actors Allan Hawco, Liane Balaban, Ryan Allen, Emma Ferreira, Kate Trotter and the late Kenneth Welsh in his final role, Midnight At The Paradise was one of the narrative highlights of the 2022 festival, playing to a packed house at its premiere.

Elsewhere in the festival, the daring dystopian action film Polaris by KC Carthew wowed viewers with its sci-fi eco-tinged storyline about a 10-year-old warrior (Viva Lee) raised by a polar bear filmed in an invented language. Also screening was Mary Nighy’s powerful and sensitive drama Alice, Darling, which features a strong performance by Anna Kendrick as a woman in an emotionally abusive relationship she has been keeping a secret from her friends to the detriment of her mental health.

Other films by women showcased at the festival include Karen Knox’s Adult Adoption about a 25-year-old former foster kid caught in a state of arrested development as she explores the idea of becoming an adult adoptee in order to find the nurturing care of a parent she missed out on in her youth; the drama Broken Angel written and directed by Jules Koostachin who was named one of Variety’s 10 Canadain’s To Watch at the festival. With a predominantly Indigenous cast, the film follows Angel (Sera-Lys McArthur), a woman who, along with her daughter, flees an abusive relationship.

Already gaining buzz following festival premieres ahead of Whistler, Laura Poitras’ thought-provoking documentary All The Beauty And The Bloodshed and Madison Thomas’ intimate look at Indigenous music icon Buffy Sainte-Marie in Buffy Sainte-Marie: Carry It On played as part of the Whistler Film Festival giving British Columbia audiences their first chance at seeing these critically-acclaimed docs.

Aside from the women-directed films, WFF has continued with its commitment to gender parity, diversity, equity, and inclusion in the screen industry with its 7th annual Women in Focus series consisting of inspirational keynote conversations, inclusive programming, and talent programs that mentorship, creative feedback and market preparation opportunities for women and non-binary filmmakers.

Films by women and stories focused on women were found throughout the festival, which continues online for Canadian audiences from December 5 through January 2.