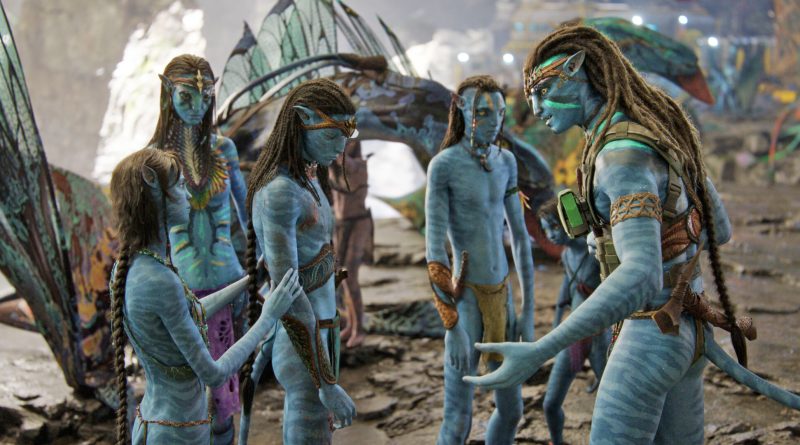 Avatar: The Way of Water highlights spectacle plus heady issues.

For thirteen years, the much-anticipated sequel to Avatar has required intensive production work. Now, Avatar: The Way of Water rewards the long wait with an extravaganza of special effects cinematic spectacle. And as the title announces, a great deal of action takes place in and around water with thrilling play, risky adventures, and rousing combat.

No spoilers here, for it’s not news that the story follows the Sullys, head of the Omatikaya clan Jake and wife Neytiri plus their children, who flee from their moon Pandora to the ocean world of the Metkayina clan and eventually the reef dwelling Na’vi. Among the Sully family, Spider stands out, significantly different because he’s a human. All will become embroiled in a battle for their very survival.

The crises and tragedies contain fewer surprises than their staging; nevertheless, the issues and their presentation still deliver an emotional impact. Consider the relevance, for example, of an extended family forced to flee environmental devastation, refugees struggling to adjust to a sometimes hostile new community (forest people vs. fish people, as they define it), parents distressed at children’s behavior and adolescent choices, strife among siblings, disobedience leading to potential disaster, and hostile forces repeatedly, viciously attacking to exploit the valuable mineral, unobtanium. Add indifference to animals as a sweet, exceptional tulkan whale is hunted and cruelly butchered.

It takes a bit over three and a quarter hours for all of this to play out with a few jolts between several scenes in the middle section. On balance, however, the action flows with entertaining speed and narrative clarity, Simon Franglen’s score adding complementary interpretation. As with all animation, here motion capture technology, so much relies on the actors’ verbal expertise; that is, their delivery and inflections must communicate as strongly as the digitally created, malleable characters with only the avatars’ faces, not human ones, to express complex emotions. With the principals Sam Worthington, Zoe Saldaña, Sigourney Weaver, Stephen Lang, Edie Falco, and Kate Winslett, all is well. At area cinemas, the absolute best way to see Avatar: The Way of Water is in 3-D IMAX.