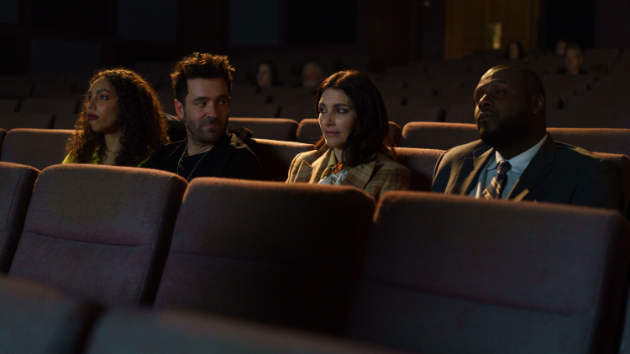 Relationships, love, and loves lost are explored in Vanessa Matsui’s tender and captivating drama, Midnight At The Paradise. With its world premiere held at the 2022 Whistler Film Festival, the film is one of the Alliance of Women Film Journalists’ nominees for the EDA Awards at the festival.

The relationships of three couples are explored over one fateful night in Toronto in Matsui’s film. Iris (Liane Balaban) is a 40-year-old wife and mother who feels stuck between caring for her dying film critic father (the late Kenneth Welsh in his final role) amid his complicated relationship with her mother (Kate Trotter) and her “good on paper” marriage to Geoff (Ryan Allen). While attempting to save the old cinema the Paradise from shuttering its doors with a screening dedicated to her dad, Iris reconnects with an old flame, Alex (Allan Hawco).

The love of her life and the “one that got away”, Iris still holds onto the past when she, Alex and her father would discuss movies at the local café. When the soon-to-be-married Alex returns to Toronto for the screening with his fiancée (Emma Ferreria) in tow, the two couples must reconcile the past and their emotions in order to move forward – together or apart.

Midnight At The Paradise is an assured drama from first-time feature director Matsui who shows real talent in storytelling. With a script written by Bill Robertson, it is no surprise the film has drawn comparisons to Richard Linklater’s Before trilogy for its relationship conversations and to Sarah Polley’s quiet Toronto marriage drama Take This Waltz. Opening up questions of what makes a good marriage and the consequences of impulsive decisions is at the core of the story. Directed with a confident hand, Matsui coaxes vulnerable and emotional performances from her cast who work together in a true ensemble.

The complex chemistry emanating from the couples at the centre of the story is what drives Midnight At The Paradise. Balaban, Hawco, Allen, and Ferreria are dynamite together on screen as every awkward pause and too-long-held gaze says so much about the dynamics of their connection. It is hard to single out any one of the performers as each gives something remarkable to their roles.

With cinematography by Jason Tan, Toronto’s cafes, cinema, and streets look alluring. The moody atmosphere reflects the air of intrigue and seems like the place where anything can happen as Iris and Alex contemplate their past and dream about what a future together could look like.

One of the highlights of the Whistler Film Festival, Midnight At The Paradise is available to screen online in Canada as part of the festival until January 2, 2023.